A fresh political rift between Somalia’s president and prime minister appears to be opening a power struggle between the two top leaders of the country, which is struggling to hold elections and prevent frequent terrorist attacks. advertisements

NISA last week blamed the Islamist militant group al-Shabab for Ikran’s death, prompting angry and frustrated posts on social media from Ikran’s parents and opposition leaders, who say the agency itself had been involved.

In a statement published Friday on pro-al-Shabab websites, a spokesman for the group said al-Shabab knows nothing about Ikran’s alleged killing.

Roble’s move against the NISA chief has prompted a public rebuke from President Mohamed Abdullahi Mohamed, better known as Farmajo, who in a counter move hours after the prime minister’s decision, issued a directive reinstating the intelligence chief. Both men were citing constitutional articles to support their cases.

Roble said he suspended Fahad “for failing to deliver a report on the murder of one of the agency’s agents.” 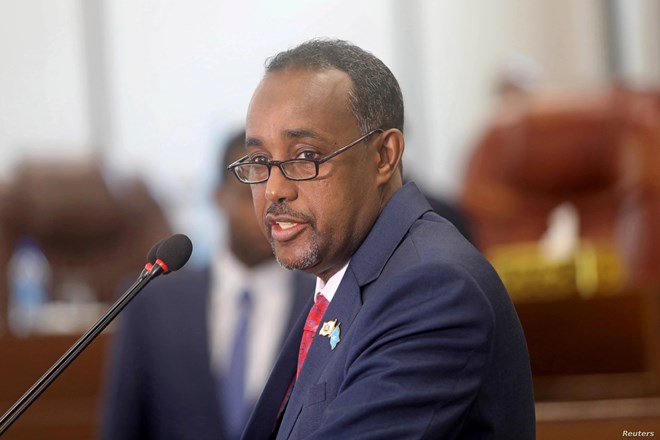 In April, after anger and armed violence in the capital, Mogadishu, that followed Parliament’s move to extend the president’s four-year term by another two years, the confrontation was resolved when the president put the prime minister in charge of security and organizing long-delayed indirect elections.

Mohamed issued his own statement calling the prime minister’s move unconstitutional. “(Yasin) should continue being the director of NISA,” the president said.

Analysts say this latest rift is highlighting a growing division at the heart of the country’s political elite and threatens to put the country into a new political crisis.

“The political exercises of the president and the minister is clear evidence that there has been a growing mistrust and a power struggle between the two leaders,” Shoki Ahmed Hayir, a Somalia political analyst and professor at Maastricht University in the Netherlands, told VOA Somali.

“We know the prime minister took this decision to address a sensitive issue over the disappearance of a female intelligence officer that could plunge the country into political and security risks,” said Hussein Moalim Mohamud, Somalia’s former national security adviser.

Opposition leaders have welcomed Roble’s move to suspend Fahad, a former Al-Jazeera journalist, whom they believe to be a close friend of the president.

The new dispute followed months of political wrangling that have threatened to further destabilize a country already riven by militant attacks and clan rivalries.

Hayir believes the new power struggle between the president and the prime minister is threatening the country’s long-delayed upcoming elections.

“This is not only a political threat, but also a threat to the country’s future, including the possibility of holding elections. It is also a threat to a justice for the family of Ikran,” Hayir said.

“The problem is that there are contradicting and unclear chapters in the country’s draft federal provisional constitution over the powers of the president and the prime minister,” said Abdirahman Dhubad, a political and legal analyst in Mogadishu.

The sister of North Korea’s leader has said Pyongyang is willing to consider another inter-Korean summit if mutual “respect” and “impartiality” between the two...
Read more
Breaking News

(CNN)In the months before Mary Johnson disappeared, her sister said she wasn't herself.Johnson and her husband, who had been living in the home of...
Read more
Breaking News

(CNN)Noman is like any other 10-year-old boy. He loves pizza, chicken nuggets and ice cream -- chocolate is his favorite flavor. He likes playing...
Read more