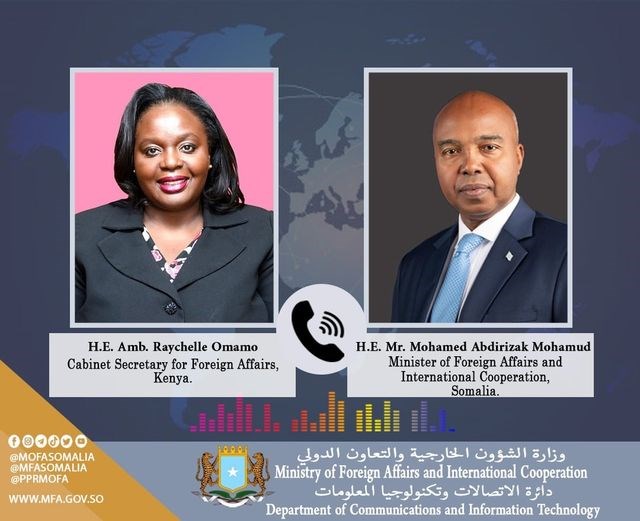 Kenya’s Foreign Affairs Minister, Amb. Raychelle Omamo, and her Somalia counterpart, Mohamed Abdirizak Mahamud, have agreed to speed up the re-opening of embassies in each other’s countries. In a statement on Wednesday, the Foreign Affairs Ministry said the duo arrived at the decision after a telephone conversation.

“Both ministers reconfirmed the need to expeditiously reopen their two missions of Kenya and Somalia, and emphasised the importance of normalising diplomatic relations between the two countries,” the Ministry said.

“The government of Kenya welcomes and acknowledges the invitation by the Federal Government of the Republic of Somalia to restore diplomatic relations between the two countries,” a statement by the Foreign Affairs Ministry read.

Kenya said it would take advantage of the latest talks to repair its relations with Somalia. On 10 June, Nairobi lifted the ban on direct flights to and from Somalia which was to last at least up to 9 August.

It said the decision to resume flights is part of Kenya’s efforts to re-establish relations with Somalia, which have been frosty since December last year.

“This goodwill measure has been made in the mutual interest of the two countries and in the hope that it will cause the full normalisation of bilateral relations between Kenya and Somalia including diplomatic, trade and people to people linkages that have undergone undue strain,’’ Kenya said.

Mogadishu responded saying the move was a ‘positive gesture’ by Nairobi and a starting point to kick off negotiations between the two nations.