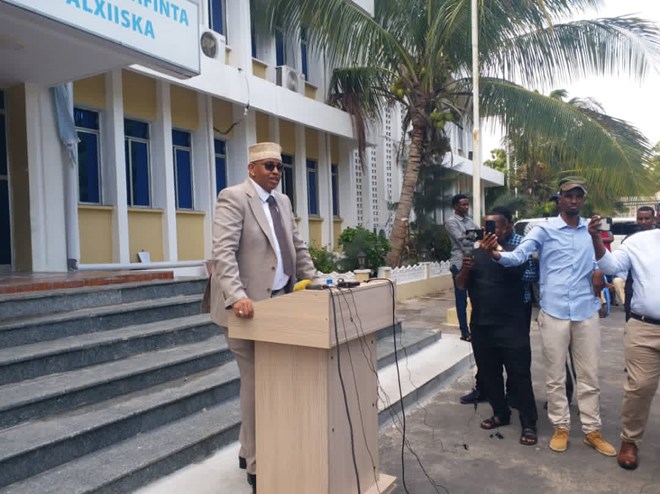 The information minister held a press conference on Thursday in response to protests in Mogadishu.

Dubbe denied that Somali troops fought alongside Ethiopian ad Eritrean forces in Tigrau and Axum. He also denied that there were soldiers who were captured in Tigray during the fighting.

The information minister accused opposition politicians of spreading lies to prop up their bids for the upcoming presidential elections.

Former Presidents Sharif Sheikh Ahmed and Hassan Sheikh Mohamud, along with Wadajir party leader Abdirahman Abdishakur all joined the chorus of people calling on Farmajo to release more information to the families of soldiers.

Former Somali president Mohamud faced heavy criticism himself during his tenure when he penned a deal with Saudi Arabia to send 15,000 housemaids despite the notoriously dreadful working conditions in the gulf.

Minister Dubbe conceded that there were Somali soldiers in Eritrea but said they were training and not in active combat. Dubbe likened the situation to Somali soldiers being trained in other allied countries, like Turkey or the U.S.

Somali troops are said to have been training in Eritrea since at least 2019.

Minister Dubbe’s statement comes on the heels of protests in Mogadishu on Thursday by mothers of the missing soldiers. The mothers demanded answers from the government on the whereabouts of the children.

Senator Abshir Ahmed submitted a complaint on behalf of the families to the Attorney General.

Late last month, the Biden administration announced that it had placed visa restrictions on Ethiopian and Eritrean officials it holds responsible for “wrongful violence” and other abuses against civilians.

The UN human rights council released a report earlier this week claimed authorities sent Somali soldiers training in Eritrea to the front lines, including accounts of Somali soldiers being present in Axum, where human rights organizations say hundreds of civilians were massacred.