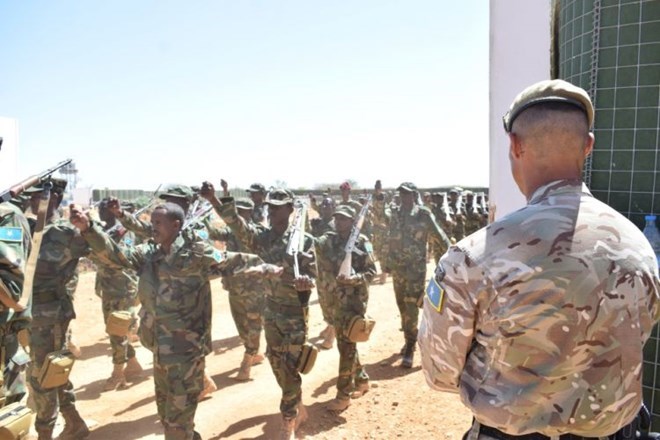 MOGADISHU (HOL) – The UK military will train an additional 600 Somali National Army troops this year as part of its efforts to bolster their capacity.

In a statement to newsrooms today, the UK embassy in Mogadishu said the British forces are reinforcing their support of SNA through various trainings in light of their planned take over of full security operations from the African Union force, Amisom.

“The British military in Somalia, deployed on operation TANGHAM, has been  running several new training programmes for the Somali National Army in Baidoa, the capital of the Southwest State in Somalia,” the statement read in part.

The training covers three key areas. These are, collective training programme which entails defensive operations, command and control, human rights, communication and shooting among others.

The second part deals with countering improvised explosive devices which are a major threat to both SNA and Amisom.

The third aspect of the training deals with logistics, planning and executing operations.

UK ambassador to Somalia Kate Foster said her country was committed to building a professional army to ‘help promote longterm peace and conduct effective operations in the region to counter Al-Shabaab.” “We are proud to be supporting Somalia to strengthen its effort in this collective
fight.”

In January 2021, the British Army trained its 500th Somali soldier in essential infantry skills, underlining the UK’s commitment to Somalia’s long-term security, with plans to train five more companies comprising around 600 troops in 2021, the statement added.

The UK Minister for Africa, James Duddridge MP, visited Somalia earlier in the year, announcing £1.6 million to counter the threat from roadside bombs, and a further £3.37 million for the Somali Security Forces engaged in joint  operations with the African Union Mission to Somalia (AMISOM).