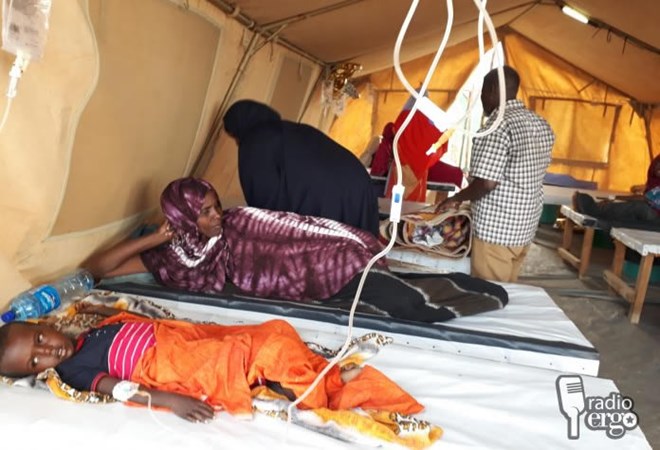 (ERGO) – The health ministry in Somalia’s regional state of Galmudug has recorded close to 400 cases of Acute Watery Diarrhoea (AWD) in Galkayo since 8 May. Most of the patients hospitalised are children. The cause of the outbreak is not clear, although the ministry has begun an investigation in the worst hit villages. Radio Ergo interviewed the ministry’s coordinator for Galkayo, Abdikarin Abshir Isse, to find out more.

Abdikarin Abshir Isse: The first cases of the disease were recorded in early May and it has since been surging, with the most vulnerable group being young children under five years old. The patients infected by this disease are being treated in an isolation ward in Galkayo general hospital to reduce its spread among other patients in the hospital. In general, the hospital is well equipped to treat the patients, who are increasing by the hour. The staff at the hospital are well-trained to deal with infectious diseases like this one. There are patients who have already been treated and discharged.

Radio Ergo: How many active cases are there in the hospital now?

Abdikarin Abshir Isse: The isolation ward has 70 beds and all of them were occupied by patients. The disease is something that is spreading fast and every hour there are new cases brought to the hospital while others are being discharged. Most of the cases are from Galkayo town.

Radio Ergo: What is the ministry’s plan to stop the spread as you said the cases are increasing fast?

Abdikarin Abshir Isse: First, this is a waterborne disease. The Gu’ rains had left behind stagnant water which is not treated. There are also a lot of flies in the town that are contributing to the spread of this disease, therefore we urge the public to observe cleanliness. We also urge the residents of the town to use treated water for consumption to control transmission of this disease. So, there is a great need for observing standards of environmental sanitation and personal hygiene.

Radio Ergo: Do you think climate change has contributed to this disease?

Abdikarin Abshir Isse: Yes, climate change is what brings disease outbreaks mostly. Sometimes, it is possible for new diseases to emerge as a result of climate change, or to bring back old diseases. Currently, we are in that season when we normally witness an outbreak of infectious diseases such as diarrhoea and measles. We have already received reports of suspected cases of measles. We appeal to the public to work with us in controlling these diseases by maintaining the cleanliness of their environment as well as personal hygiene.