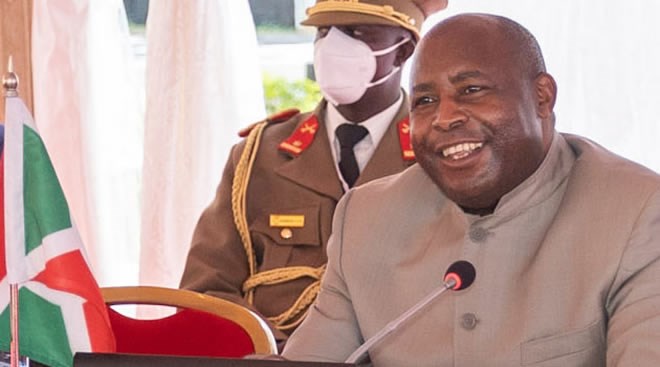 NAIROBI, Kenya, May 31 – Burundi President Evariste Ndayishimiye has cautioned that an uncoordinated withdrawal of the African Union Mission in Somalia (AMISOM) could reverse gains achieved so far in restoring peace and security in the region.

He was making reference to plans to reduce troops in Somalia in readiness for a full pull out, which was part of  aUN Security Council recommendation in 2017.

President Ndayishimiye who addressed a joint news conference in Kisumu on Monday at the onset of his two-day State Visit to Kenya instead urged for consultations before such a decision is undertaken.

“Any initiative aimed to reduce the AMISOM troops in Somalia must take into account the degree of the threat from the Al Shabaab terror group in order not to lose the part of territory already recovered by the AMISOM. The countries contributing troops to Somalia as well as the African Union must be consulted on any plans to reduce troops from Somalia,” President Ndayishimiye stated in remarks delivered at the State Lodge in Kisumu.

AMISOM troops are scheduled to exit in December 2021 after the United Nations Security Council (UNSC) extended the 28 February mandate deadline.

According to the 2017 Somalia Transitional Plan which was endorsed by African Union Peace and Security Council and the UN Security Council, AMISOM’s exit from Somalia is dependent on fulfillment of three priorities including operational activities, institutional capacity building and supporting activities.

The Al Shabaab terror group however remains a major threat for Somalia and beyond and has increased its attacks in recent months.

Somalia has also had strained political stability, with failure to hold scheduled elections in 2020 and early 2021 raising tension.