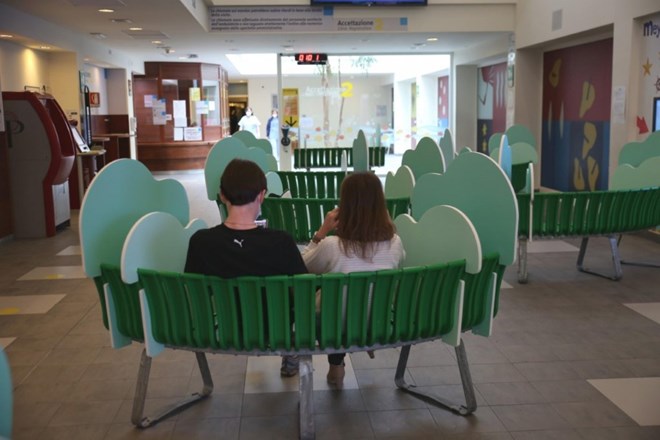 Mohamed* was just 14 years old when he left Somalia, entrusting his life to traffickers in hopes of reaching Europe. In Libya, he was tortured and almost died from tuberculosis. Thanks to a humanitarian corridor, the 17-year-old was able to transfer to Italy and receive medical care.

After two months of hospitalization for a severe form of tuberculosis that almost killed him, Mohamed* is now ready to begin a new life. However, it will not be easy for him to forget the past — his arms are marked with scars from the torture to which he was subjected in Libya.

At just 14 years old, he left his home country in hopes of reaching Europe. He only told doctors about his plans, not his parents or his nine siblings. Before he arrived in Libya, he entrusted his life to a human trafficking organization and crossed through Ethiopia, Sudan, and Egypt.

In Libya, he was imprisoned and tortured by traffickers, first in a camp and then in a flat.

Mohamed got on boats headed toward Europe twice but both were stopped by Libya’s coast guard. While at a detention center, he fell ill with tuberculosis — a life-threatening disease — and a node in his neck that prevented him from swallowing.

He was sent to a hospital in Libya, where a tube was inserted into his abdomen to artificially feed him. But after he was released from the hospital, his condition worsened rapidly.

Arrived in Italy via humanitarian corridor
What saved him was a humanitarian corridor — a program that allows vulnerable migrants and refugees to be transferred from Libya to Italy because private charities (mostly Church organizations) sponsor their stay in Italy. Mohamed was able to travel to Italy, where he was treated at Meyer Children’s Hospital in Florence.

“When he arrived at Meyer, he was in critical condition,” said Lucia Macucci, a nurse from the international cooperation unit of the children’s hospital. “He was very weak, malnourished, fainting and almost couldn’t walk.”

He has since been released from the hospital and will be welcomed into a foster home where he can begin his new life.