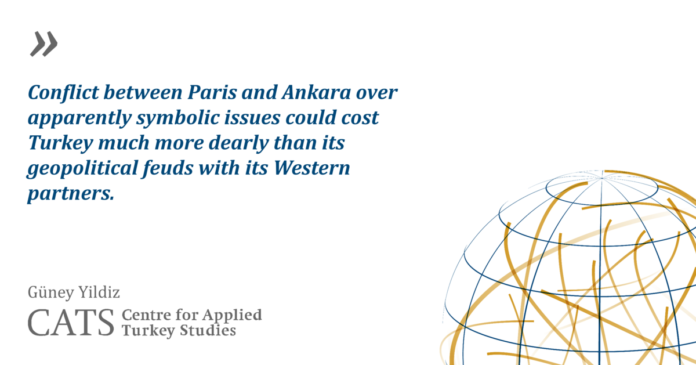 The spat between Erdoğan and Macron over Islam is driven by broader issues. Ankara is pushing back against French efforts to curb its influence over the Turkish diaspora and seeking leadership in the Sunni world. Sinem Adar argues that Europe’s leaders should act prudently.

Relations between Turkey and France have deteriorated since 2019. They now stand on opposing sides in Syria, Libya, the eastern Mediterranean and Nagorno-Karabakh. France is the most prominent EU member advocating a confrontational policy towards Turkey. The recent spat between President Recep Tayyip Erdoğan and President Emmanuel Macron over Islam adds a cultural dimension. On 25 October Erdoğan proclaimed that Macron needed “mental treatment” for his hostility against Islam and called for a boycott of French products. France responded by recalling its ambassador from Ankara. European leaders expressed solidarity with France, but Pakistan’s Prime Minister Imran Khan accused Macron of attacking Islam and Kuwait, Jordan and Qatar also saw calls to join a boycott. Major protests occurred in Bangladesh, Libya, Iraq and Syria. But the UAE supported Macron’s call to prevent “the ghettoisation of Muslims in the West” and accused Erdoğan of stoking religious discord.

Curbing Ankara’s Influence in the Diaspora

The immediate background to Erdoğan’s campaign against Macron is proposed French legislation to prevent “Islamic separatism”, including having imams trained in France and curtailing foreign influence on France’s Muslim populations. On 17 February, Macron announced that bilateral agreements would replace an exchange programme established in 1977 to allow nine countries (including Turkey) to send imams and teachers to France. He signalled his willingness to sign such an agreement with Turkey, but noted that Turkey was the only country with which France had been unable to reach agreement on a separate proposal to increase transparency in the funding of mosques.

But the origins of the conflict are older. The Turkish state’s interest in the lives of Turkish citizens living abroad precedes the AKP and was largely tolerated by European countries. Since the early 2010s, however, Ankara has adopted a more active approach towards the Turkish diaspora, included allowing citizens to vote without having to travel to Turkey, providing family support and education services, and pursuing policies that particularly target the youth. Arguably, none of these would have raised serious objections without two further developments: the dramatic deterioration in relations between Turkey and Europe from 2016 and Ankara’s efforts suppress opposition within its diaspora, including involvement of the intelligence services. These efforts have been subject to close scrutiny in various European countries.

French moves to curb Ankara’s diaspora policy can only partially explain Turkey’s reaction. Erdoğan’s ambition to make Turkey the leader of the Sunni world is crucial. Relevant initiatives include his framing the reconversion of the Hagia Sophia into a mosque as a harbinger of liberation of the Al Aqsa mosque in Jerusalem, his rhetoric on Islamophobia in Europe, the formation of a Muslim transnational space involving public intellectuals, opinion leaders and scholars, and cultural influencing via Turkish TV series. These efforts are driven by Ankara’s rivalry with the UAE (and Saudi Arabia) and its desire to establish itself as a regional hegemon, and are met with mixed sentiments in the Muslim world.

For a variety of reasons including pragmatism, lack of alternatives and ideology some view Turkey’s support for the Muslim Brotherhood during and after the Arab Spring positively, while others perceive it as championing political Islam and risking radicalisation. Turkey’s role as the main host country for Syrian refugees is widely acknowledged, and its overt confrontation with European leaders and critical references to their colonial and imperial past are seen in a positive light as echoing prevailing sentiments among Muslims around the world. The Turkey’s aspiration for Sunni leadership conveniently intertwines with its claim to be countering Western hegemony and defending the rights of those it marginalises and oppresses.

Ankara regards this as justification for its spat with France over Islam. Frequent and detailed coverage of Macron’s comments about Islam in mainstream Turkish media contrast tellingly with sparse reporting of the beheading of French schoolteacher Samuel Paty. Turkey’s increasingly militarised foreign policy, its interventions in the Turkish diaspora and its identitarian logic coincide with increasing isolation in the international arena. In this context, the row with France should also be interpreted as an opportunistic move to consolidate Turkey’s appeal among Muslims, while weakening opposing Arab governments such as the UAE.

The culture war between Turkey and France is only the tip of the iceberg. Lurking underneath is geopolitical rivalry with France and the UAE, and instrumentalisation of Islam towards this end. Turkey does not hesitate to use disruptive tactics in this complex multi-actor rivalry – whether in the form of hard power, as manifest in its increasingly militarised foreign policy, or rhetorically as in the spat with Paris.

European leaders need to counter Ankara’s rhetoric of combatting Islamophobia. Firstly, they should make it clear that they understand the problem. And secondly, they should respond to the demands of their Muslim populations. Given that both Islamophobia and Islamist extremism are realities in European countries, political leaders need to refrain from moralising discourses and instead foster inclusive conversations on how to accommodate Islam while addressing the socio-economic roots of radicalisation.

A Nation in Fight with Itself: The Hagia Sophia between Ideas and Elites

With his announcement that the Hagia Sophia will be reconverted into a mosque, Turkish President Tayyip Erdoğan is seeking to foment identity conflict for political gain. Thus far, the opposition has avoided the trap and declined to enter this fight. Salim Çevik argues that Europe should do the same.Point of View, 17.07.2020Günter Seufert

Its Aims, Their Limits and the Challenges for Associations of People of Turkish Origin and Decision-makers in GermanySWP Research Paper 2014/RP 10, October 2014, 28 Pages