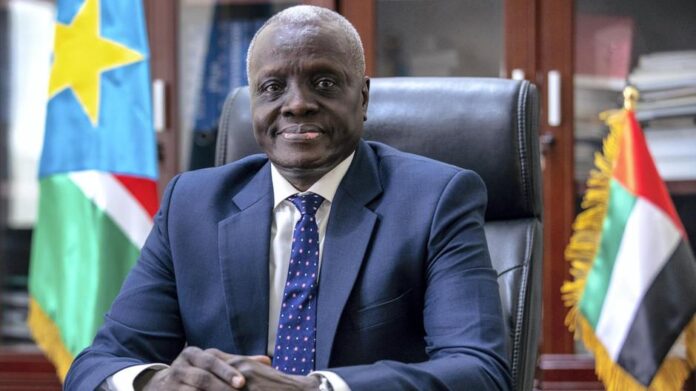 The Ambassador of South Sudan in Abu Dhabi tells ‘The National News’ how the world’s youngest country pins high hopes on gaining the trust of foreign investors as it looks to move forward.

Political stability and maintaining peace are crucial for the survival of the youngest country in the world after many years of struggle to build up state institutions and end tribal violence, South Sudan’s ambassador in Abu Dhabi said.

In an interview with The National, Ambassador Deng Deng Nhail said corruption is also one of the largest obstacles to the development of a country rich in natural resources that should be spent properly on infrastructure and basic services.

Mr. Nhail, in office since 2016, says his country sees the UAE as a role model in how it has become an economic and technological success story.

“The UAE’s achievements in infrastructure, basic services, trade, tourism and technology are top-notch. We will learn a lot from the UAE and build on the agreements President Salva Kiir Mayardit signed during his visit to Abu Dhabi in 2019,” Mr Nhail said, referring to agreements on investment, avoiding double taxation and visa waivers to UAE citizens.

After two decades of war, South Sudan gained its independence from Sudan on July 9, 2011 following a landslide majority in a referendum.

Peace, however, was short-lived.

Since then, South Sudan has been torn apart by a civil war which began in 2013 after President Salva Kiir Mayardit sacked Vice President Riek Machar. Both belong to the influential Dinka and Nuer ethnic tribes respectively.

The two men signed a peace accord in 2018 and formed a government of national unity in February 2020, ending a war that is estimated to have killed more than 400,000 people.

The conflict uprooted a quarter of South Sudan’s population of 12 million people, ruined the country’s agriculture and battered the oil-based economy.

Despite the peace deal, the United Nations says violence is still raging in parts of the country.

“Political stability is first and foremost. We have relative peace now. As stipulated in the 2018 agreement we have to establish state parliaments and governments, cantonments for a big unified army. This is a vast country that has 64 tribes,” said Mr. Nhail.

Mr Nhail, who himself was born during a civil war in 1961, said there are three ways to attract foreign investors to a stable South Sudan and gain their trust as the country looks to move forward.

“We need to have a good infrastructure, good education and digital economy to fight corruption. We have a 2030 vision that will see free trade zones, a new capital city in Ramciel, which means let’s meet in the middle thanks to its strategic, central position and the nature of its flat land,” he said.

“We need to have good infrastructure, good education and digital economy to fight corruption. We have a 2030 vision that will see free trade zones, a new capital city in Ramciel – Ambassador Nhail.

The dilapidated infrastructure, mainly as a result of decades of war, has been identified as the most binding constraint for economic growth in the land-locked country.

The post-conflict South Sudan will need more than $10 billion to build and upgrade around 10,000 km of roads, according to the Ministry of Transportation.

The African Development Bank (ADP) estimates there were about 35 metres of paved road per thousand residents, compared to an average of 128 metres in Sub-Saharan Africa’s cities and 700 metres in the low-income countries of the developing world.

On his country’s main economic challenge, Mr Nhail said that effective management and development of the country’s vast resources is vital to achieve sustained economic growth as the country’s economy has been badly hit by war, hyperinflation and Covid 19.

He said South Sudan wants to diversify its revenues by adopting a mechanized agriculture economy as the majority of the country’s population depend on farming for its livelihood.

“We can grow any plant in South Sudan as 96 per cent of the land is arable, we have the mineral resources and the water. We have the oil and 22 minerals including gold,” said Mr. Nhail.

“Mining is big in South Sudan. We also have an impressive wild life of 13 reserves and 8 national parks, which will become a key national income revenue from tourism. We will build hotels, golf courses and restaurants. We are very ambitious.”

Flowing out of Central Africa, the White Nile is the major geographic feature of South Sudan. Oil revenues from the production of almost 500,000 barrels a day account for 98 per cent of state revenues.

Since independence, Juba has contracted oil sales worth $2.14 billion, according to the latest statistics last year by the International Monetary Fund (IMF).

The local currency has nosedived since the outbreak of the 2013 civil war. The South Sudan pound depreciated to SSP 176 per US dollar compared to SSP 2.92 per US dollar eight years ago.

The severe currency depreciation has increased inflation to an estimated 31.1 per cent