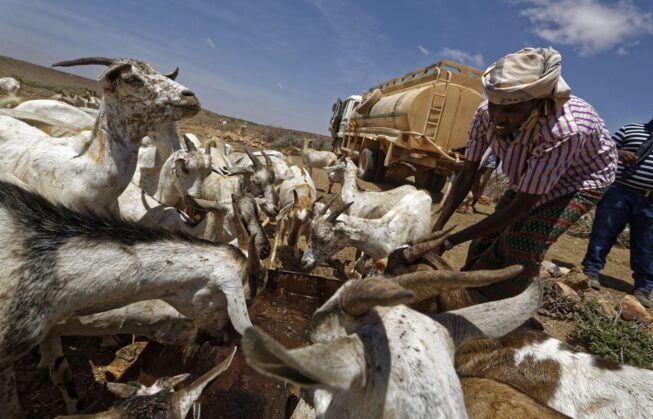 These effects are affecting livelihoods, and contributing to local grievances and community tensions. Some of these insights and conclusions were reached based on a special report done by the Somali government in 2013. This report remains the best estimate of the impact of changing weather patterns in the country as no newer data are available.

According to the report, the country experienced a gradual and continuous increase in median annual temperatures between 1991 and 2013. Median daily maximum temperatures range from 30°C to 40°C. The report estimates that temperatures will increase by between 3.2°C and 4.3°C by the end of the 21st century.

Climatic changes such as drought fuel herder-farmer conflicts because settled communities and livestock herders must compete for fewer resources. In 2019, 53,000 people were forced from their homes due to crop failure and reduced livestock profitability due to drought.

They joined an estimated 2.6 million Somalis already displaced by other factors like conflict. There were also disastrous droughts between 2000 and 2011 that resulted in famine, food insecurity, water scarcity and loss of livelihoods.

These factors combined increase the risks of violent conflict. Many affected believe that they have less to lose from joining armed groups to survive when their livelihoods are threatened.

Studies have not found a direct causal link between climate change and conflict. Rather, researchers argue that climate change may exert an indirect and conditional effect on conflict risk.

Our fact sheet on Somalia identifies multiple pathways through which climate-related change interacts with political, social and environmental stresses to worsen existing vulnerabilities and tensions.