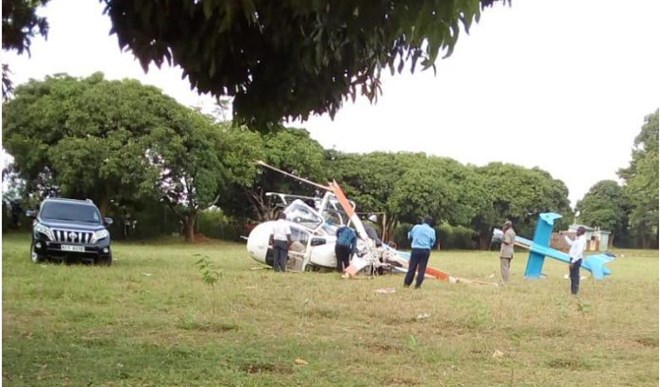 Former Prime Minister and ODM leader Raila Odinga is safe after a helicopter crashed in Siaya moments after dropping him.

In a statement, the former PM’s Spokesperson Dennis Onyango said that Raila Odinga was safe following an incident in which a chopper that had flown him from Kisumu to Gem in Siaya County crashed shortly after dropping him and his entourage of four people.

“The Helicopter, Bell 407, Rregistration 5Y-PSM had dropped Mr Odinga at Kudho Primary School in Gem when it attempted to lift off to create space for other planes,” said Onyango.

The two leaders jetted in Kisumu for a three-day working tour where the President officially opened the Ksh 1.6 billion Kodiaga-Wagai-Onyirore/Akala and Nyangweso-Muhanda road and the Ksh 2.4 billion Siaya-Bondo water supply and sanitation project.

Addressing wananchi at Wagayi trading centre in Gem Constituency, President Kenyatta and former Prime Minister Raila Odinga said the fruits of the handshake are manifest throughout the country as peace and harmony continues to prevail while development projects are rolled out.

“All these projects you are seeing us commissioning are as a result of peace and unity, and I won’t stop appreciating my brother because of the handshake.