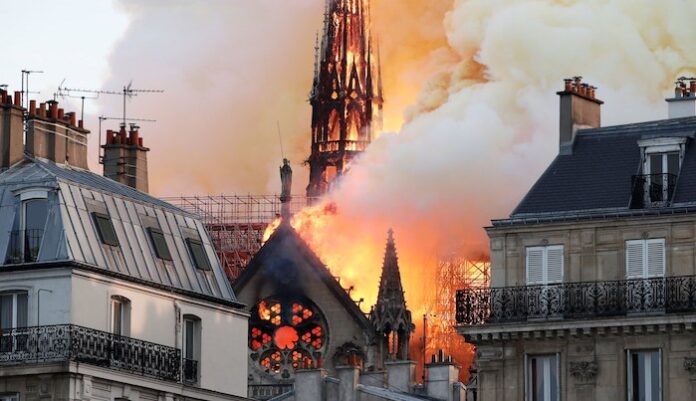 Strasbourg: In a packed, converted hangar in a suburb of Strasbourg, eastern France, a thousand men knelt on mats for Friday prayers as an imam intoned in Turkish. Outside, hundreds more placed rugs in the courtyard for want of space. Kneeling in prayer, the men faced Mecca via a set of football goalposts.

“We’re lucky the sun is shining. When it rains it’s not much fun,” said Volkan Duran, 49, vice-president of Eyyup Sultan mosque. “This place is too small.”

But his prayers for more room may soon be answered. Just 100 metres away, construction is under way for a replacement; a huge space with a prayer capacity of 2500 that also boasts a school, restaurant, library and 14 shops. The new Eyyup Sultan Mosque will be one of Europe’s largest.

On its website, Milli Gorus Association, a Turkish diaspora group, claims it will be “comparable in symbolism” to Notre-Dame de Strasbourg, the world’s oldest Gothic cathedral.

But a row over its funding has President Emmanuel Macron’s government accusing it of symbolising something far less flattering – namely “foreign interference” against its attempts to build an a political “Islam of France” and to stamp out Islamist “separation”.

The spat highlights the minefield the French government faces in cracking down on radicalism, upholding secularist laws and fielding complaints of a dearth of dignified places of worship among France’s estimated 6 million Muslim population (around 2 million practising). Officials concede it could do with tripling the mosque capacity.

With France reeling from a spate of terror attacks – the most recent last week in which a known radical stabbed a police woman before being shot dead – tackling extremism has become a hot issue, particularly ahead of this month’s regional elections and next year’s presidential ballot where Macron once again faces Marine Le Pen, the far-right leader.

“Today he who finds a good enemy and makes a lot of noise wins the election, and I think we are being used to this end,” sighed Eyup Sahin, the mosque president and regional head of Milli Gorus. “The best thing to do is to just grin and bear it.”

The controversy erupted in March after Strasbourg’s Green mayor accepted a request from Sahin for a €2.5 million subsidy out of a total budget of €32 million.

While the rest of France bans public funding of new religious buildings, the regions of Alsace, where Strasbourg is located, and Moselle can allow it owing to a separate status dating back to when it was part of Germany.

While the mayor said she was merely rubber-stamping a project already approved by her predecessors, it prompted Gérald Darmanin, Macron’s tough-talking interior minister, to accuse her of funding an organisation that “supports political Islam” and had links with the Turkish state.

Moreover, he said Milli Gorus was guilty of refusing to sign Macron’s “Charter for the Principles of French Islam”, which accepts Islam’s compatibility with the values of the French republic and gender equality and rejects political Islam and the notion of apostasy. Sahin said the association only declined because its representatives were not consulted and had been presented with a fait accompli, “as if we were brigands that must now promise to abide by French laws”.

He said: “We have always abided by French law and our prime enemies are Islamic extremists.”

Furious at the setback for Macron’s ambitions to create an Islam of France, Darmanin seized the funding request as a gift horse, said Fouad Douai, in charge of the upkeep of the nearby grand mosque of Heyritz, which successfully received state funding in 2000.

“By not signing the charter, Milli Gorus provided him with the perfect opportunity to crack down on them. Meanwhile, the Green mayor made a blunder in good faith by starting her mandate with such a touchy subject while there was an ongoing nationwide row over Islam,” he said.

“It was manna for extremists, with on the one hand Muslim ones able to say, ‘You see, look how they treat us’ and on the other those who claimed the town hall was funding radical Islam.”

Darmanin ordered a legal challenge to the planned subsidy, while Gabriel Attal, a government spokesman, even claimed the association, which has chapters around the world including in Australia, had “no reason to organise activities or to exist in France”.

‘One of the great leaders of our times’: Turnbull endorses Macron’s anti-terror plan

“Hopefully this opens everyone’s eyes and the ‘separatism’ law will soon be passed,” tweeted the interior minister.

Approved by MPs in the National Assembly in February, and beefed up in the Senate in April, the bill notably requires all associations to commit to upholding “republican values” if they accept state subsidies. It cracks down on religious funding from countries such as Turkey, Qatar or Saudi Arabia by obliging associations to declare donations over €10,000 and have their accounts certified.

The right-wing senate majority later added bans on face coverings including for parents accompanying children on school outings. However, the centrist Macron camp opposed the move and it will now return to parliament for a final vote.

Recep Tayyip Erdogan, Turkey’s firebrand president, recently branded the planned law a “guillotine of French democracy” that was “openly in contradiction of human rights, freedom of religion and European values” and called for its “withdrawal”. The Macron camp accused him of meddling in domestic affairs.

Sahin has denied any backing or funding from the Erdogan camp. “We have not received a single centime from the Turkish state,” he said.

Samim Akgonul, head of the Turkish studies department at Strasbourg university, said he believed the truth lay somewhere in between. There was no doubt that Milli Gorus was politicised but it was increasingly autonomous and not close to Erdogan – it had backed the Turkish opposition in the last elections – although that could help explain why donations had run dry. The French government’s opposition to granting it state aid highlighted a paradox, he added.

“A French association asking for funding from a French town is arguably proof of Milli Gorus’s growing autonomy and integration into an Islam of France. If you deny this mosque foreign funding but at the same time say it can’t have state funding, what can it do?”

At the mosque, 25-year-old engineer Omer Turhan, said: “I have studied in the UK and it’s far easier to practise one’s faith there in peace. Here, there is growing pressure from the far-right.

“We are French mosque-goers and feel singled out and stigmatised. What do they want us to do? Leave? Go where? I’m French. I was born here and would be treated as a foreigner anywhere else. There is no logic.”

The mosque project, which would serve the 30,000 or so people of Turkish origin in Strasbourg, was approved in 2013, and the first stone was laid in 2017 in the presence of French officials and Turkey’s Deputy Prime Minister.

“All those who criticise it today supported and worked on the project bar the Greens. It’s incomprehensible,” fumed Sahin.

Given all the furore, he said that he had withdrawn his request for funding for now. “We may ask for it at a later date but with all the media coverage, our donations have shot up, so we are hopeful of getting back on track,” he said.