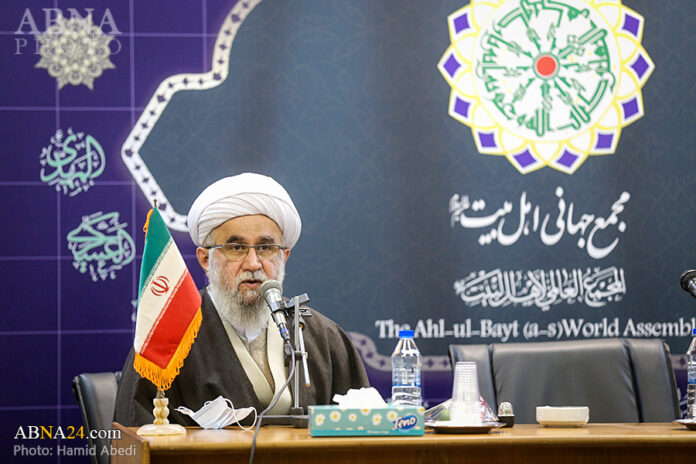 AhlulBayt News Agency (ABNA): On Saturday (May 29, 2021), in a speech at the prayer hall of the AhlulBayt (a.s.) World Assembly, Ayatollah Reza Ramazani, the Secretary-General of the Assembly, expressed hope that the evil Covid-19 virus will disappear soon from human society, and thanks to the prayers of Imam Mahdi (a.s.) the human emotional dimension will flourish again.

“The enemies are always planning to distance between the officials and the people of the Islamic Republic of Iran. The officials of the Legislature, the Executive, and the Judiciary must work to solve the problems of the people and reduce the class gap. One of the seven recommendations of the Statement of the Second Phase of the Revolution of the Supreme Leader is justice and the fight against corruption,” stated the Secretary-General of the AhlulBayt (a.s.) World Assembly.

“The Guardian Council, the body in charge of qualifying candidates for the election, selected seven candidates. Selected individuals must present their programs in the areas of cultural, economic, political, and especially social damage. stated Ayatollah Ramazani,” referring to the presidential election and the qualified people.

“Factories in Gilan, which employed thousands of people, were closed. As a result of this tragedy and crime, many young people became unemployed,” he said, describing the social damage in society as an important issue.

“Imam Khomeini and Supreme Leader Ayatollah Khamenei, as leaders of the Islamic community, dedicated themselves to the system and the revolution. The precious martyrs have also emphasized in their orders and wills the need to pay attention to the orders of the Vali Faqih. No one should doubt this,’ he said.

“Anyone who does not participate in the election has no right to demand. The elected person is the president of all the people of Iran, and he must dedicate himself to serving all the people,” stated Ayatollah Ramazani.

“This revolution has not been achieved easily, and pure blood, from teenagers to great figures, has been sacrificed for it. Today, we are the trustees of this revolution, and along with the Islam, republic of the system must be preserved,” said the Secretary-General of the AhlulBayt (a.s.) World Assembly in the end.