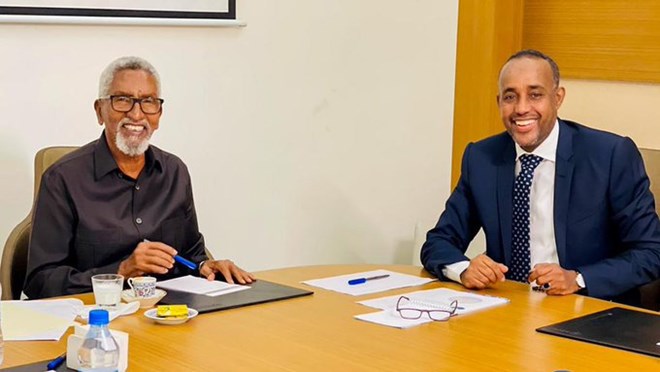 Mogadishu (HOL) – Somalia’s Prime Minister, Mohamed Hussein Roble, met with the Speaker of the Upper House Abdi Hashi Abdullahi on Monday to discuss election issues and how Somaliland will be represented in the upcoming polls.

A government spokesperson confirmed the meeting and said that the PM would be making an effort to speak with all stakeholders as he continues his dialogue with the Federal Member States on implementing the September 17 agreement.

One of the main obstacles at previous electoral negotiations was the composition of the electoral committees in Gedo and Somaliland. The Upper House Speaker previously rejected the federal government’s appointee’s to the Somaliland commission and accused Farmajo of gerrymandering the election process to install supporters as delegates.

Hashi wrote to international bodies – including the AU and UN – in mid-November accusing President Farmajo of unilaterally selecting the committee without input or involvement from Somaliland stakeholders. The Speaker warned that Farmajo’s decision would have “catastrophic consequences for the Somali people” if left unchecked.