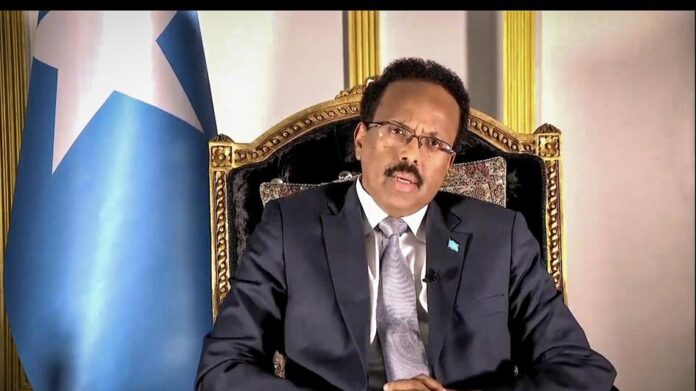 Talks in Mogadishu could lead to deal on elections after months of violence and tension.

Negotiations between Somali leaders to organise elections after a lengthy postponement are making progress, raising hopes of an end to the country’s worst political crisis in years, a UN official said on Tuesday.

He said they were close to a deal after more than three months of tension and violence.

President Mohamed Abdullahi Mohamed, known as Farmajo, last month extended by two years his mandate which had expired on February 8, leading to clashes between government forces and pro-opposition groups in the capital, Mogadishu.

Addressing the UN Security Council, Mr Swan said “closed-door, confidence-building meetings” led by Prime Minister Mohamed Hussein Roble this week in Mogadishu were close to a breakthrough in the crisis.

“We are encouraged that so far, a positive atmosphere prevails, and all sides report progress being made in the discussion,” Mr Swan said.

“The news this afternoon is also highly positive, and it appears the Somali principals are very close to an agreement … we hope it will be delivered in the coming hours.”

He urged Somalia’s political leaders to strike an “implementable agreement” on holding elections as soon as possible and steer the country away from “instability and insecurity” when drought and widespread threaten.

The talks between Mr Roble, the leaders of Somalia’s five semi-autonomous states and the mayor of Mogadishu, are taking place in a tent at the city’s airport, a high-security zone protected from attacks by Al Qaeda-linked Al Shabab extremists.

The summit has focused on sources of disagreement, including the composition of the electoral commission, poll security and logistics, voting in semi-autonomous regions and the date for an election.

Somalia’s Foreign Minister Mohamed Abdirizak told the 15-nation Security Council that negotiators had reached a deal on holding free elections, fair elections but he said talks would be likely to continue until Thursday before an announcement was made.

“The negotiation process has not been easy,” Mr Abdirizak said.

“This demonstrates how vital consensus remains. And, without consensus, how fragile peace in Somalia is and how fragile our institutions of governments remain.”

Mr Mohamed’s rise to the presidency in 2017 was seen by Somalis as a sign of hope, as he had committed to tackling corruption and the Al Shabab group that has, since 2007, fought to topple the federal government.

The president’s decision to extend his mandate was, however, seen as a means of reinforcing his power base while his time in office has achieved only limited gains against Al Shabab.

Mr. Mohamed struck a deal with the states in September 2020, paving the way for indirect elections before his government’s term expired.

But the agreement collapsed as Mr Mohamed and the leaders of Puntland and Jubaland states argued over terms before, under domestic and global pressure, the president agreed to return to the terms of the September deal.

Somalia has been ravaged by conflict since long-standing dictator Siad Barre was toppled in 1991. A UN-backed federal government controls only a small portion of territory with the backing of some 20,000 African Union troops.