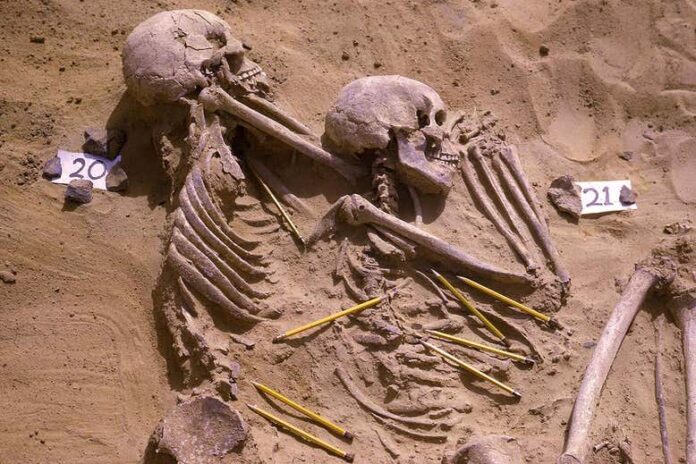 Individuals buried at the prehistoric cemetery Jebel Sahaba in Sudan seem to have experienced violence and trauma at several points during their lives. The discovery may help us understand the prehistory of violence before the origin of farming.

At about 13,400 years old, Jebel Sahaba is one of the earliest sites displaying signs of mass conflict. Violence between communities seems to have become more common once people settled in one place to farm, which had begun happening by about 12,000 years ago. But evidence of organised violence among more mobile communities, like those represented by Jebel Sahaba, is unusual.

The remains at the cemetery were exhumed in the 1960s, and once it was clear that 20 of the skeletons carried injuries, it was suggested they had belonged to people who had died during a single war. A reanalysis shows that this probably wasn’t the case.

Isabelle Crevecoeur at the University of Bordeaux in France and her colleagues examined the remains of 61 individuals, including the 20 already found to have injuries. They identified more than 100 healed and unhealed bone lesions that were previously undocumented and indicate that these pre-agricultural people survived several instances of violence during their lives.

“We knew that we were going to find maybe some additional lesions, but, in this case, this systematic and really thorough analysis of the remains allowed us to add 21 individuals to the 20 that were already recognised with traumatic lesions,” says Crevecoeur.

There were probably deliberate, sporadic and recurrent attacks between different cultural groups among these hunter-fisher-gatherers, says Crevecoeur.

“We do not know of any other cemetery at that time which shows such a high rate of people injured and killed,” says Thomas Terberger at the University of Göttingen in Germany. “This high rate of conflict is something unique and it will be a task for the future to analyse whether this is outstanding evidence, or perhaps the reanalysis of other [similarly ancient] sites will show more evidence of such conflicts.”

The team found that most of the lesions were related to impact marks from projectiles, and in some cases there were still bits of stone embedded in the bones of both men and women. These fragments may have come from the heads of arrows or spears.

“These results enrich our understanding of the contexts in which violence emerges among foragers,” says Luke Glowacki at Harvard University. “They provide additional evidence for an emerging consensus that foragers, just like agricultural peoples, had interpersonal violence in the form of raids and ambushes.”