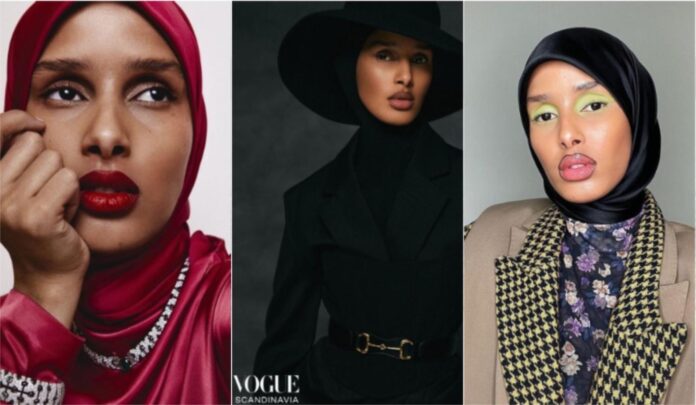 Model and influencer Rawdah Mohamed has announced that she will be the fashion editor of Vogue Scandinavia, which launches this summer.

In a statement posted to her Instagram page on Tuesday, the Somali-Norwegian said she was well prepared for the role at one of the most iconic brands in fashion.

“I’m hoping to be a cultural force with lots of learning, growing and facing the challenges that come with it. Hope you all are as ready and proud as I am for this,” she said.

Mohamed has long featured in high-profile fashion and beauty campaigns, collaborating with some of the industry’s biggest brands. She is known for mixing street style with high fashion, as well as her tailored and colourful looks.

Vogue Scandinavia, the 28th global edition of Vogue, is launching this summer and will be available to buy exclusively from its digital flagship store in an effort to be more sustainable.

The magazine will cover Nordic countries including Sweden, Norway, Denmark, Finland and Iceland.

With over 130,000 followers on Instagram, Mohamed has also been a vocal activist, speaking out on a number of issues.

In April this year, Mohamed started the #HandsofMyHijab campaign to protest against a proposed French ban on minors wearing the hijab in public.

On 30 March, the French Senate introduced a new law announcing the prohibition “in the public space of any conspicuous religious sign by minors and of any dress or clothing which would signify an inferiorisation of women over men”.

The legislation was slammed by critics who said it primarily targeted Muslim citizens.

In her opposition to the move, Mohamed recalled several instances of bullying and discrimination she experienced after deciding to wear the hijab as a young girl, sharing her accounts with her followers online.

The model described being rejected from jobs due to the hijab, and being verbally and physically assaulted, to the extent that she would carry a spare hijab around with her in case hers was pulled off.

“It is our duty as the people to stand up and fight for each other’s rights. The hijab ban is hateful rhetoric coming from the highest level of government and will go down as an enormous failure of religious values and equality,” she said.

“When I was eight years old I was called into a meeting with my teachers. They were discussing ways to end the bullying I was subjected to by my classmates. Their solution was that I shouldn’t wear the hijab to school.

The social media campaign quickly went viral with people worldwide showing their solidarity with hijab-wearing women in France in their thousands. The hashtag also became widely used in France, with the hashtag #PasToucheAMonHijab also being used.

Notable participants in the campaign include US Congresswoman Ilhan Omar and Olympic fencer Ibtihaj Muhammad, as well as other activists and influencers.

In a recent post on Instagram, Mohamed also used her platform to raise awareness of the Israeli bombardment of Palestinians in the besieged Gaza Strip, as well as attacks by Israeli police and far-right mobs on Palestinians in occupied East Jerusalem and the West Bank.

Encouraging her followers to keep sharing news reports of the events unfolding on social media, Mohamed also condemned Israel for its violations over the past month.

“However pointless it may seem, continue to share, use hashtags and stay informed. Israel cares a lot about their appearances in the media. Let’s reveal their atrocities shall we?” she said.

Mohamed’s announcement has been met with widespread praise online.

Vogue just launched in Scandinavia and RAWDIS is the fashion editor 🤩🎉 omg! Seeing this girl rise to success is just amazing MashaAllah. She has the poise and wit of Iman and is so incredibly down to earth. Love it 💓 pic.twitter.com/ZhiFjUZIpT— Salma (@SalmaWrites) May 25, 2021

Many have hailed her new position as a “win” for Somali girls and women who wear the hijab.

A win for somali girls everywhere!!!!

Last year, prominent Somali supermodel Halima Aden said she was quitting the fashion industry and only taking on work on her own terms, after citing numerous examples of being forced to compromise her religious beliefs in order to fit in.

Aden, who walked the catwalk at New York Fashion Week, also spoke about how being the first model in a hijab on catwalks and magazine covers was difficult.

The posts, which were shared with her 1.2 million followers on Instagram, resonated with her online audience. Many praised her for speaking out and some said they could relate to the issues she faced.