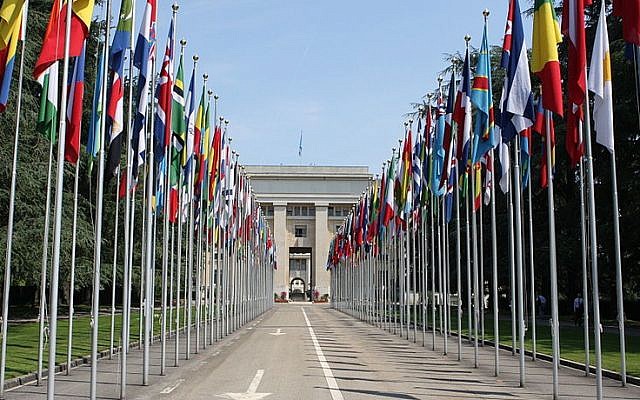 Proposal comes ahead of rights council session on ‘grave human rights situation’ in Gaza, West Bank, East Jerusalem; no commission of inquiry has ever received a continuing mandate

Member states of the Organization of Islamic Cooperation are calling on the UN Human Rights Council to set up a permanent commission to report on alleged human rights violations in Israel, Gaza and the West Bank.

The move comes in the wake of this month’s 11-day conflict between Israel and terror groups in Gaza. If passed, it would mark an unprecedented level of scrutiny authorized by the UN’s top human rights body.

The proposal by the OIC comes ahead of a special session of the Geneva-based council on Thursday to address “the grave human rights situation” in Gaza, the West Bank and East Jerusalem. The meeting was sought by Pakistan, the OIC’s coordinator.

The investigators, the text of Pakistan’s request said, should probe “all alleged violations and abuses” of international law linked to the tensions that sparked the latest violence.

The Hamas-run health ministry in Gaza said at least 243 Palestinians were killed, including 66 children and teens, with 1,910 people wounded in the violence. It does not differentiate between terror group members and civilians. The Israeli military maintained that it killed some 225 terrorist operatives and that the Palestinian death toll was in fact considerably higher than was reported. It said some of the civilian fatalities were caused by Hamas rockets falling short and landing in the Strip. 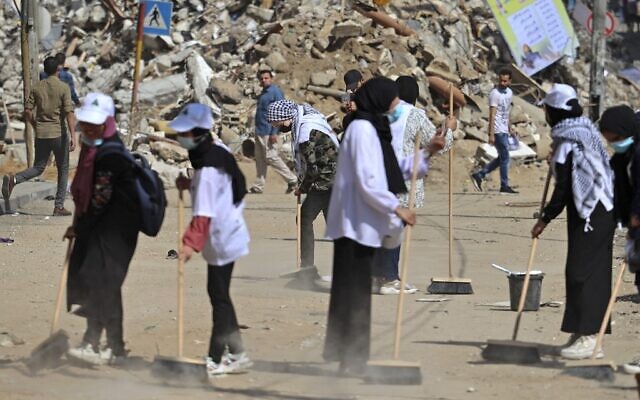 Palestinian volunteers sweep dust in front of a building destroyed during the latest round of fighting, in Gaza City’s Rimal district on May 25, 2021. (MOHAMMED ABED / AFP)

Thirteen people were killed in Israel, all but one of them civilians, including a 5-year-old boy and a 16-year-old girl. Some 357 people in Israel were wounded.

During the fighting, outgoing International Criminal Court prosecutor Fatou Bensouda said the court may look into the fighting as part of its current probe into alleged war crimes in the region, which date back to the events leading up to the last major Gaza conflict in 2014.

But the Human Rights Council draft text goes far beyond the most recent conflict, also calling for investigators to probe “underlying root causes of recurrent tensions and instability, including systematic discrimination and repression based on group identity.”

The investigation should focus on establishing facts and gather evidence and other material that could be used in legal proceedings, and as far as possible should identify perpetrators to ensure they are held accountable, it said.

“Long-standing and systemic impunity for international law violations has thwarted justice, created a protection crisis and undermined all efforts to achieve a just and peaceful solution,” the draft text said. 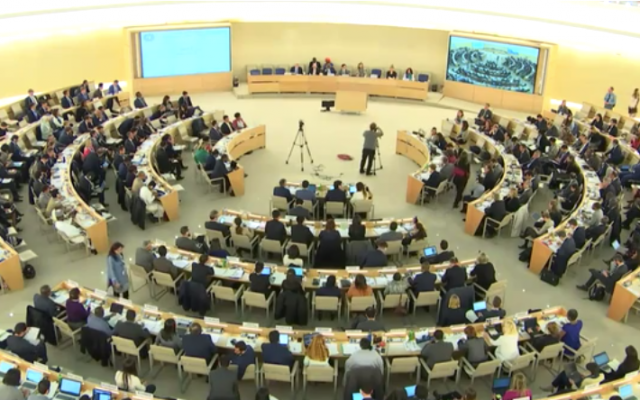 The session at the 47-member-state rights is slated to last all day.

A vote on the draft resolution is likely at the end of Thursday’s session, which will be largely virtual.

Council spokesman Rolando Gomez says passage of the draft resolution would mark the first time that a commission of inquiry received a “continuing mandate.”

It remains unclear whether there will be enough support at the Human Rights Council to pass the resolution.https://9cf71d865feecd781c1dd6981f8885bb.safeframe.googlesyndication.com/safeframe/1-0-38/html/container.html

Twenty of the council’s 47 members were among the 66 countries that backed holding Thursday’s special session, which was requested by Pakistan and the Palestinian Authority.

The rights council holds three regular sessions each year, but can hold special sessions if at least a third of members support the idea. 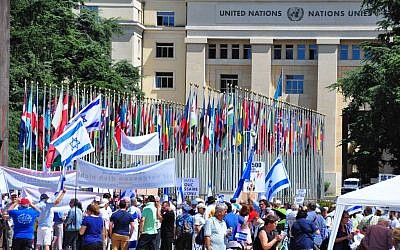 Supporters of Israel rallying outside the UN building in Geneva as the Human Rights Council met, June 29, 2015 (World Jewish Congress)

Israel accuses the council of anti-Israel bias and has generally refused to cooperate with its investigators. Israel’s ambassador, Meirav Eilon Shahar, has called on member states to oppose Thursday’s meeting.

“The convening of yet another special session by the Human Rights Council targeting Israel is testament to the clear anti-Israeli agenda of this body,” she said on Twitter.

Israel is the only country that is systematically discussed at every regular council session, with a dedicated special agenda item.

The standing agenda item and body’s overall anti-Israel stance were among the main reasons that the United States under former president Donald Trump decided to leave the council.

His successor Joe Biden has returned the United States to the fold as an observer, with an eye on membership, arguing that while the council “disproportionate[ly] focuses on Israel,” the US can be more influential from within it than it can from the outside.