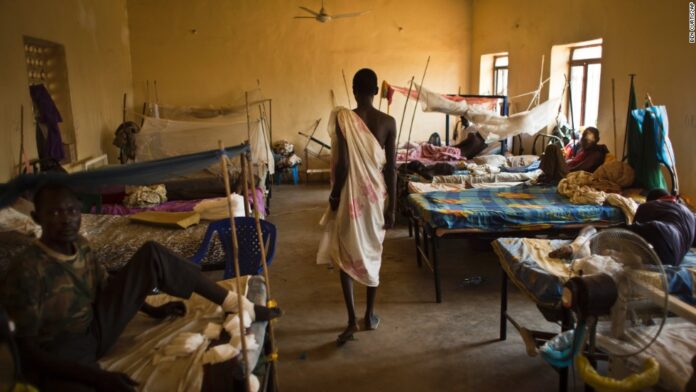 Juba Teaching Hospital is one of the oldest public health institutions in South Sudan. Most (if not all) residents within the capital, Juba, seek treatment here. Some patients are brought from States with the hope of getting a better health service, something the institution is not on a record of delivering.

Located in Juba Town, the hospital was rumored to lack medicines with health professionals who have not been paid for nearly six months allegedly verbally harassing patients due to frustration, setting them on a path to death.

On 19th May 2021, Nyamilepedia went on a fact-finding mission. It was at 11:00 pm when a patient battling a heart complication was rolled in. The doctors on the day shift have departed and replaced by two health personnel in a ward accommodating more than 20 patients.

At midnight, a grievous commotion was heard coming from the Outpatient Department. The patient with a heart complication just died.

“Only if they intervened my brother could have survived,” cried a young woman whose mother and other family members were threatening suicide. It was a devastating scene sparked by an unprecedented level of medical negligence.

Inside Gynaecology and Obstetrics Department

The Gynaecology and Obstetrics Department is among many departments established after the hospital was renovated in 2019 with funding and support from the government of China. But a new facility does not guarantee better service delivery.

On the same night, Nyamilepedia caught up with people who accompanied their loved ones for treatment. Deng Daniel Dau was one of them. He brought his wife for delivery.

Mr. Deng entered the consultation room. When he stepped out he was directed to go to the lab and get a tube in which his wife’s blood and urine would be extracted for testing. The lab is upstairs, the steps are dark and almost invisible.

With the adage “mind the steps” in mind and the desperation to save his wife, Deng navigated the stairs and found his way inside the laboratory where he would pay SSP 3000 to get the required facilities.

Back in the Obstetrics and Gynaecology Department, Deng was referred to the Labour Ward. Here, he was welcomed by a wailing group of women, who just lost their colleague in labor at a cesarean section.

Less than two hours later, the ward was engulfed by another tragedy. A woman whose name was withheld died of a pregnancy complication after making it to the cesarean section as well. Three deaths from 11:00 pm to 01:00 am.

Like everyone else around at the time, Deng was stunned. His wife was not yet attended to despite the release of the urine analysis and blood test results. The obstetricians needed SSP 20,000 before they could take a further step.

“I don’t have much money, I would have paid to save the life of my wife if I was employed and getting better pay. May you please assist her as a family member who offered to help brings the money you need?” Deng pleaded.

The head of the obstetricians in service, a slightly old woman with bleached skin, gave a staggering response. “My son, SSP 10,000 of this money goes to the government, and half of that money goes to the people who work throughout the night to save lives”. That was the last time she spoke to Deng.

In her bed, the wife fell unconscious. Obstetricians had no time for her but their WhatsApp. Others were comfortably sleeping. Amid an emergency, they were absolutely unbothered.

It was at 5:00 am in the morning when Deng’s wife was unable to move and had to be rolled on a wheelchair by her husband. Three hours later, she became irresponsive. At midday on Thursday 19th May, she was confirmed dead.

The husband wept helplessly. Notwithstanding his condition, the hospital gave him an ultimatum to stretch the body of the wife out of the Labour Ward. It hurt to see. Deng called home to inform of the tragic incident.

Where all these family members have been amid all of Deng’s struggles is a question for another day. They thronged the ward, wanting the heads of the obstetricians in silver platters. The latter were evacuated by the security guards as the scene turned chaotic.

Our undercover reporter made headway to the Neonatal Ward. Inside this ward are infants inside incubators – some, born with birth anomalies, are on oxygen.

Medication for these infants is only available at high prices whenever the need arises. A woman who spoke on condition of anonymity said she bought a baby Sippy Cup at SSP 7000. At a private clinic adjacent to Juba Teaching Hospital, that price is SSP 2000 less.

“If you buy from another place they (the doctors) tell you that they do not recommend. You don’t have to reason with them,” we have no option because we want our babies alive and in good health,” she said.

Like in the Labour Ward, infants breathe their last at the Neonatal Ward, especially if money is lacking. We tried to reach higher authorities at the Ministry of Health to explore the reason behind the deplorable state of the hospital.

Our efforts were unsuccessful. Multiple phone calls went unanswered and attempt to meet the Spokesperson at the Ministry of Health to obtain the mortality rate at the hospital were fruitless.