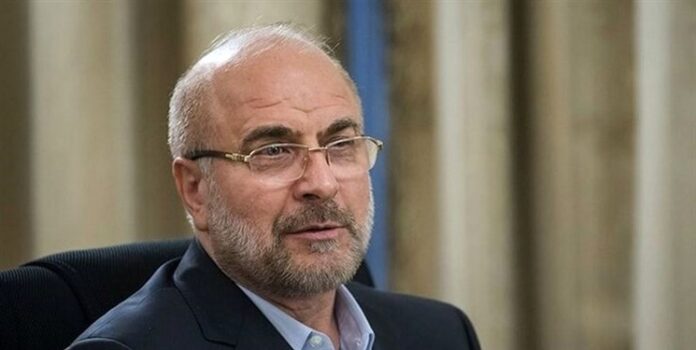 “The recent victory of the Palestinian people was, in fact, a great victory for the Resistance Front and the Palestinians living in the occupied territories and Gaza, as well as the Muslim world,” Qalibaf said in a meeting with Vice-Speaker of the Syrian Parliament Mohammed Akram al-Ajalani on the sidelines of the 4th extraordinary meeting of the Palestine Permanent Committee of the Union of Parliaments of the Organization of Islamic Cooperation (OIC) in Tehran on Monday.

He expressed the hope that relations between the two countries would further deepen, and that “mutual cooperation would lead to more defense and support for dear Palestine”.

Al-Ajalani, for his part, described the Palestinian issue as one of the complicated issues in the world, and said, “The victory of the Palestinian people displays the victory of all the nations that have suffered from the oppression of global arrogance, and we hope that Palestine will earn victory to leave no point and place in this region for the Zionist regime, which is a parasite and viral being, and the virus will soon disappear.”

In relevant remarks on Sunday, Commander of Iran’s Basij (Volunteer) Forces Brigadier General Gholamreza Soleimani said that the recent war between the Palestinian resistance forces and Israel revealed the mere reality that annihilation of the Zionist regime is possible.

“The Zionist regime is void of nationality and nation-state, which is the main structure of a country, as its people are people just from different parts of the world,” General Soleimani said, addressing a ceremony in the Northern city of Babolsar.

He added that one day the Palestinian nation dreamt of even throwing stones at the Zionist forces, but in the recent 12-day war the resistance forces launched repeated missile attacks against the occupied territories and the regime was even forced to close its airports.

“If the conditions are ripe, the end of the Zionist regime will come soon,” General Soleimani said.

Also on Sunday, Chief of Staff of the Iranian Armed Forces Major General Mohammad Hossein Baqeri said that the recent Intifada of the Palestinian people and resistance groups weakened the Zionist regime more than ever.

“The new intifada has disgraced and humiliated the fake and child-killing Zionist regime and the occupiers of the holy Quds, and raised the flag of Palestinian resistance not only in Gaza and the occupied territories but also across the world. It also weakened the Zionist regime’s spider web more than ever,” General Baqeri said.

Elsewhere, he underlined the Iranian Armed Forces’ full preparedness to defend the country, saying, “They consider strategy of strengthening defense, offensive and deterrence power as their permanent agenda and are fully prepared and equipped with intelligence supremacy to confront any threat against the independence, territorial integrity and national security of our beloved country decisively and courageously.”

General Baqeri assured the nation that the Armed Forces will not allow enemies to harm the country at all.

The Palestinians and Israeli regime declared a truce on Friday after 12 days of war.

The Israeli military launched a bloody military onslaught against the Gaza Strip on May 10, razing many homes and civilian buildings to the ground in the already-besieged Palestinian territory.

Meanwhile, Palestinian sources reported that the death toll from Israel’s ongoing aggression against the besieged Gaza Strip has risen to at least 248 Palestinians, including tens of children and women.

The report by the Palestinian Health Ministry noted that Israel’s military aggression, which lasted for 11 days, has also wounded over 1,900 civilians, dozens of them seriously.

Meantime, retaliatory rocket attacks by Hamas and Islamic Jihad against Israeli targets came in response to Israel’s relentless airstrikes on the densely-populated enclave.

On May 16, Israeli sources said that Gaza-based Palestinian resistance groups had fired around 4,000 rockets toward the occupied territories over the previous several days, surpassing the pace seen during an escalation in 2019 and the 2006 war with Lebanon’s Hezbollah resistance group.

Israel had to accept self-declared ceasefire on Friday.