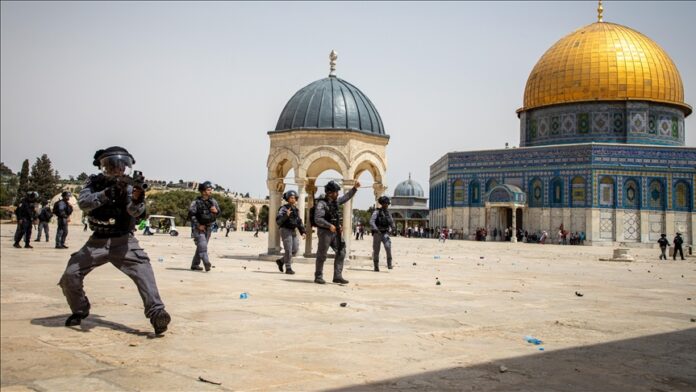 Muslim leaders in Europe on Monday welcomed an International Criminal Court investigation into Israeli crimes against Palestinians launched earlier this year in March.

“European Muslim Forum [EMF] welcomes the investigation launched by the International Criminal Court in The Hague in the spring of 2021 regarding the alleged crimes of Israel in the Palestinian territories,” the group said in a statement.

The group called on the international community to end Israeli “atrocities before their consequences become irreversible.”

“It is these days, wishing to remain in power at all costs, Israeli Prime Minister Benjamin Netanyahu plunges his state into disaster, pouring blood over Palestine and Israel,” it added.

Representing “the will of Muslims” over more than 36 EU countries, EMF said it “does not intend to let this executioner get away with it and will not remain aloof from what is currently occurring.”

“EMF believes that Netanyahu should be held personally accountable for the inhuman treatment of the people of Palestine, the encroachment on its sovereignty and the desecration of the holy sites of Islam,” it said.

Tension escalated across the Palestinian territories since last month over an Israeli court verdict to evict Palestinian families from their homes in the Sheikh Jarrah neighborhood in Jerusalem in favor of settlement groups. The situation flared up after Israeli forces raided the Al-Aqsa Mosque and assaulted worshippers inside.

The tension spread to the Gaza Strip, with Israel launching airstrikes that killed at least 248 Palestinians, including 66 children and 39 women, and injured more than 1,900 others. Health authorities in the West Bank confirmed that 31 were also killed in the occupied territory, totaling 279 across all Palestinian territories.

Twelve Israelis were also killed in Palestinian rocket fire from the Gaza Strip. The fighting, the fiercest in years, came to a halt on Friday under an Egyptian-brokered cease-fire.

EMF said Israel’s Netanyahu’s actions caused a “a wedge between Arabs and Jews, Jews and Muslims, Palestinians and Israelis.”

The Israeli premier’s “inhuman orders and hate statements must receive the most serious and rigorous assessment from the standpoint of international humanitarian law,” it added, urging that he not be allowed to “escape punishment.”

“Hereby EMF calls on constructive forces from among the Palestinian victims of Netanyahu’s cabinet’s policies and from Jewish organizations that disagree with his actions – as well as human rights organizations in Europe and America to work together to hold Netanyahu accountable to the fullest extent of the law and prevent the region from slipping into conflict of everyone with everyone,” it added.