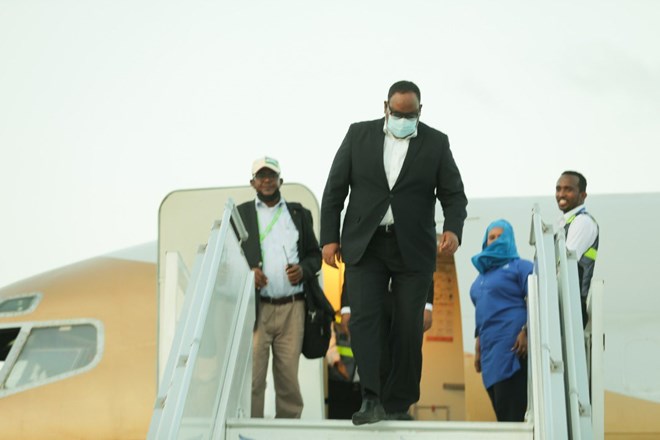 Mogadishu (HOL) – The latest round of consultative electoral talks is set to begin on Saturday.

All of the Federal Member States (FMS) leaders are now in Mogadishu – with Puntland President Said Abdullahi Deni landing on Friday – setting the stage for a much-anticipated meeting with Somalia’s federal government to finally settle the electoral crisis.

The Spokesperson of the Federal Government of Somalia, Mohamed Ibrahim Moalimuu, said that the PM would chair an ice-breaking session with the regional leaders on Saturday.

Somalia’s Prime Minister, Mohamed Hussein Roble, who has been asked to chair the conference by President Farmajo, said on Wednesday that he is confident in a positive outcome this time around.

“I am optimistic that it commences smoothly and ends satisfactorily so that the country goes to transparent and mutually agreed upon elections. I am committed to taking all facilitative measures that will lead to the success of this conference.”

The PM sat down with Jubaland, Galmudug, South West, and the Governor of Banadir on Thursday at a dinner hosted in their honour. A similar function is expected to be held on Friday with the Puntland President.

This latest round of electoral talks comes after six months of UN-backed talks previously failed to resolve the dispute, ultimately pushing Somalia to the brink of civil conflict.

They called on Somalia’s leaders to work together to end the electoral crisis.

“We call on all FGS and FMS leaders to make constructive compromises to reach agreement quickly, so that the country can swiftly organize elections based on the 17 September Agreement.”