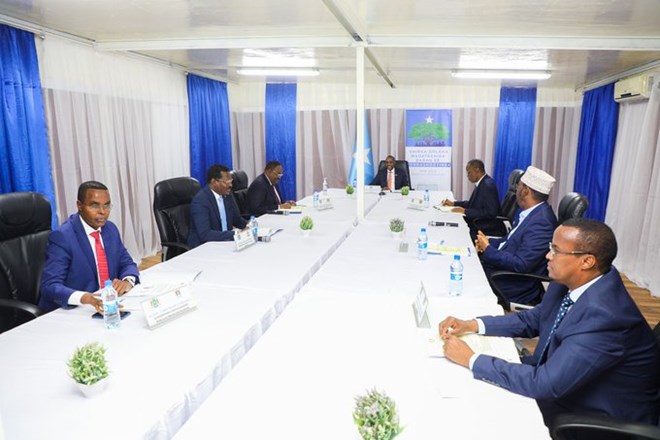 MOGADISHU (HOL) – President Mohamed Farmaajo skipped the just opened electoral talks in Mogadishu Saturday after it emerged his attempts to chair the meeting were rebuffed.

Sources said the outgoing leader had sought to chair the talks despite earlier handing the responsibility to Prime Minister Mohamed Roble but the Federal Member State leaders and the international community rejected the idea.

The talks opened at the airforce hangar in Afisyoni area near the airport with all the FMS leaders and Banaadir Regional Governor Omar Filish attending.

The opposition and the joint alliance of Jubbaland and Puntland had demanded that Farmaajo can only attend the talks as a presidential candidate.

Farmaajo failed on several occasions to agree with the FMS leaders on an electoral deal culminating in an unsuccessful bid to stay in office for two more years through a Lower House resolution which has since been voided.

The talks which are on the seventh round but first being chaired by PM Roble are expected to resolve the long-running stalemate which almost degenerated into full-scale violence in Mogadishu last month.