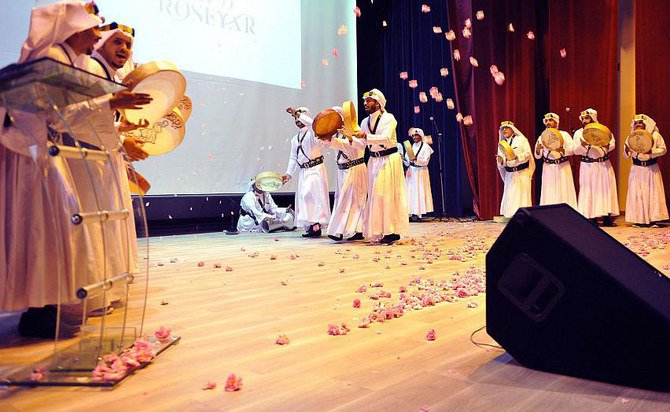 JEDDAH: The province of Taif has a rich tradition of original folk culture that includes the Majrour dance, which is characterized by the special rhythms that made it one of the most popular arts in the Makkah region.

As one of the ancient arts in the Arabian Peninsula, the people of Taif excelled in it. The name Majrour became closely associated with them until the dance became known as “Taif’s Majrour.”

Studies have revealed that the dance has been performed since ancient times among the Thaqeef tribe. Some of the tribes surrounding Taif — including Tuwairiq, Al-Nomour, Bani Sufyan, Al-Ashraaf and the tribes near Thaqeef — practice this tradition.

Majrour includes singing a lyric to the rhythm of the drum and the beating of the tar instrument, interspersed with some other dances to form a distinctive heritage tradition with a special folkloric character.

There is hardly an occasion or feast in Taif without Majrour.

During the performance, the Majrour troupe, comprising 15 to 20 people, is divided into two opposite rows wearing a uniform known as “Al-Hawisi,” a wide, white dress with a belt containing live ammunition along its circumference.

The drummer begins playing the drum rhythmically, followed by the tar player, and then a monotonous movement is performed to achieve the threefold harmony of the drum, tar and the troupe movement. After that, one of the rows sings the first verse, and when it ends, the row’s movement and the tar resumes, and the other row repeats the same verse.

This maneuver continues in each verse twice until the end of the lyric. A dancer from the silent row struts between the two rows with graceful movements that include sitting, standing and swaying in harmony with the rhythms of the drums. The row from which the dancer left follows his movements. The dancer changes the way the rhythm is and follows a rhythm known as “kisra.”

As soon as there are signs of joy at the arrival of Eid or any celebration, the people of the Najran region flaunt their folkloric dances that inspire hope, love and peace.

The head of the Folklore Committee at the Culture and Arts Association in Najran, Massoud bin Abdullah Al-Zahouf, said that the folkloric games in Najran reflect the region’s diverse heritage.

He added that the people of Najran partake in different folkloric games during Eid, including Al-Zamil, in which a troupe of men stand in a row and chant a verse from a poem to be greeted by another troupe.

There is also Al-Razfa, which is performed without a rhythm by a troupe divided into two rows, who take turns to chant poetry verses. Each row moves with or against the direction of the other row, and these movements are interspersed with occasional dances in the middle by two people.

Al-Zahouf explained that the Al-Muraei and Al-Toboul are among the most prominent folk arts in the region, and that they are performed during holidays and special occasions. They combine melody and rhythm and are performed by a group of people who dance in the same style as Al-Razfa while repeating poetic verses.

He added that the northern governorates of Najran are famous for their performance of the Mathloutha dance, which has a distinct melody and is conducted in a circle, with one person in the center and dancers performing beautiful rhythmic movements.