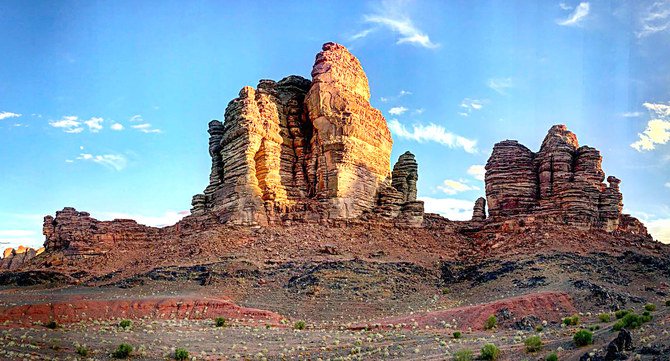 MAKKAH: The Hisma mountains, west of Tabuk in northern Saudi Arabia, are home to Arab inscriptions carved by the Thamud and other ancient tribes dating back more than 2,600 years.
Archaeological remnants are common in the mountains, which formed part of a trading route for camel convoys and were well known among traders because of their ship-like formation.
Salma Hawsawi, a professor of ancient history at King Saud University, told Arab News that the Kingdom is rich in archaeological evidence of ancient civilizations that prospered in the varied geography and climate offered by various regions.
“Saudi Arabia includes plains that narrow and expand, mountain heights, and plateaux and deserts with oases,” she said.
The region’s geographic and climatic differences led to a diversity of civilizations, Hawsawi added.
At various times the Hisma mountains also have been known as the Hisma Sandy mountains, the Hisma plateau and the “Ship” mountains.
These mountains are about 1,000 meters above sea level, and are located east of the Hijaz range, and are bordered by Al-Sharat mountains to the north, Wadi Araba to the northwest and Harrat Al-Rahat to the south.

“The area was distinguished by features that encourage human settlement such as the abundance of water, fertile ground, favorable climate and trade routes,” Hawsawi said.
“It was one of the most important areas where people settled since the dawn of time,” she added.
“The Thamud people inhabited the area, and it was said that it was the home of the Shuaib people who were mentioned in the Qur’an. The area was also linked to the Babylonian civilization in Mesopotamia.”
According to Hawsawi, the Tabuk region was mentioned in classical sources by the first-century Roman astronomer and geographer Ptolemy, who compiled lists of cities and countries known at that time, determined their borders, and documented important information about their people and relationships with each other.
The region was mentioned in Yaqut Al-Hamawi’s “Mu’jam Al-Buldan,” as well as in fifth and sixth-century poetry.
Hawsawi said that the Hisma mountains are home to Thamudic inscriptions dating back 2,600 years and Arab inscriptions that pre-date the Islamic period.
“There is hardly any area without Thamudic inscriptions, as well as inscriptions in the Hasami dialect, an Arabic dialect similar to the Nabataean dialect which is the first Arabic writing whereby the letters are attached to each other,” she said.
“These inscriptions abound, and we mostly find proper names or prayers documented by people who passed through the area, which was a station for trade convoys and travelers. The old trading route goes from south to north to the Levant.”
The Hisma mountains have become part of the history and civilization of the peoples who lived there, and the diverse inscriptions in the region reveal a historical heritage and shed light on an important aspect of the Arabian Peninsula’s past, Hawsawi said.

Muhyiddin: Muslim world must ensure worldview of Islam continues to be properly studied

The Philosophers of the Golden Age of Islam

Earliest known war was a repeated conflict in Sudan 13,400 years ago