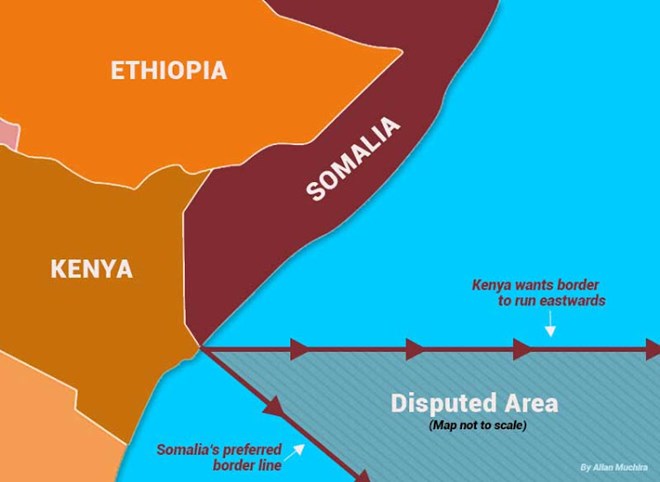 Kenya and Somalia will equally share proceeds of oil and gas sales within the disputed maritime triangle in a deal brokered by Qatar.

A redacted agreement between the two warring states exclusively seen by the Star shows the 50:50 sharing deal is expected to be signed in Doha soon.

Qatar has a major interest in Italian international Oil giant Eni which is carrying out explorations on some of the blocks in the disputed territory.

Qatar Petroleum also signed a deal with Total, a French multinational oil and gas company which alongside Eni have ownership of the oil fields for a 25 per cent stake at offshore L11A, L11B and L12 blocks, which are not part of the dispute.

Total made an entry in Lamu Basin in 2011 when it acquired 40 per cent interest in five exploratory blocks- L5, L7, Lila, LI lb and LI 2 from Anadarko Kenya Co, Dynamic Global Advisors and Cove Energy PLC.

Eni has a 41.3 per cent participating interest while  Total has 33.8 per cent.

The oil blocs sold to Qatari are said to be approximately 15,000 square feet with water depths ranging from about 1,000 metres to 3,000 metres.

It had planned initial exploration mid last year but shelved plans for an unknown reason.

The boundary dispute is still pending before the International Court of Justice.

In March Kenya withdrew from the case accusing the ICJ of bias in the case that concerns a 160,000 square  kilometre triangle in the Indian ocean. The are is thought to be rich in oil and gas.

It objected to the presence on the ICJ panel of a Somali judge, saying he should recuse himself.
A Qatari diplomatic official in Nairobi however said that healthy diplomatic ties between Kenya and Somalia is what motivated the gulf nation to mediate and resolve hostility arising fro the disputed maritime dispute.

The official who sought anonymity citing the sensitivity of the matter denied reports that Qatar was protecting its interests in the oil and gas blocs in the Indian Ocean.

”It is true that the Government of Qatar bought three oil exploration blocs in the Indian Ocean within Kenya’s territory through Qatar Petroleum in 2019. However, those blocs are not part of those contested by Kenya and Somalia,” he said.

He added Qatar is a key trading partner of both countries and any disharmony was bad for business.

Somalia argues its maritime boundary should run in the same direction as the southeasterly path of the country’s land border.

In contrast, Kenya claims the border should take a roughly 45-degree turn at the shoreline and run in a latitudinal line.