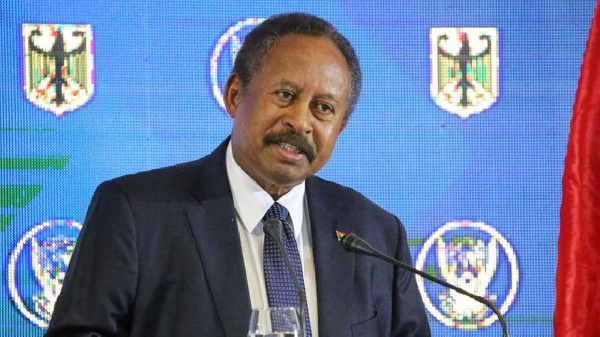 Egypt’s president and Sudan’s interim leader met in Paris on Sunday ahead of a conference on how to help Sudan’s struggling economy.

Abdel Fattah el-Sissi and the head of Sudan’s ruling sovereign council General Abdel-Fattah Burhan posed for photographs with their delegations during the meeting in the French capital.

Both leaders will attend the talks about Sudan, which are scheduled to begin on Monday.

The conference is meant to drum up investment and financing for the country, as it manages an economic crisis following years of international isolation due to US sanctions.

The leaders will also attend an economic conference for African leaders, which will have a focus on how to revive the continent’s economy post-coronavirus pandemic.

The pair’s meeting also comes as Egypt tries to help mediate an end to the escalating conflict in Gaza and Israel.

Sudan is hoping to maximize its visit to France to wipe out a staggering $60 billion foreign debt bill this year by securing relief and deals at the Paris conference.

Sudan Prime Minister Abdalla Hamdok has already settled the World Bank arrears, those of the African Development Bank, and in Paris, they hope to settle the International Monetary Fund arrears.

“Paris also is home to the Paris Club, our biggest creditors… and we will be discussing debt relief with them,” Hamdok said.

Arrears due to the African Development Bank were cleared through a bridging loan worth $425 million from Sweden, Britain and Ireland, while debts to the World Bank were paid off with a $1.1 billion bridging loan from the US.

Hamdok took office at the head of a transitional government shortly after the 2019 ouster of President Omar al-Bashir whose three-decade iron-fisted rule was marked by economic hardship, deep internal conflicts, and biting international sanctions.

In the past two years, Hamdok and his government have pushed to rebuild the crippled economy and end Sudan’s international isolation.