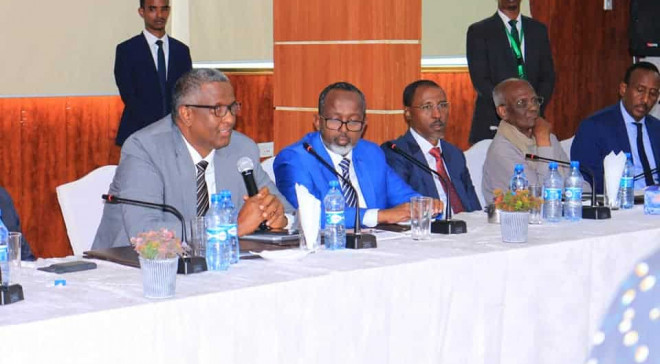 Currently, the country is yet to settle following a pre-election standoff which is yet to be solved, despite the pressure from members of the international community and local actors who want an involving local process for the sake of peace and stability in the country.

But some reports emerging from insiders say the opposition is regretting the withdrawal of the Somali National Army (SNA) loyal to the them were persuaded to leave Mogadishu after staging mutiny in April.

The troops protested against President Mohammed Abdullahi Farmarjo’s continued stay in office before he rescinded the term extension decision. In return, the government agreed no to victimize them besides reviewing their salaries to a better scale.

Rashid Abdi, an analyst on the Horn of Africa affairs claimed one of the leading presidential candidates had told him: ” removing our faces from the city before a political settlement was a big strategic mistake. I remember you said something like that”.

He didn’t mention the name of the candidate but the country currently has fifteen (15) people who are interested in running for the presidency. They include former Presidents Sharif Sheikh Ahmed and Hassan Sheikh Muhamud, former Prime Minister Hassan Ali Khaire, Wadjir partyy leader, Abdirahman Abdishakur Warsame, among others.

On Sunday, the opposition accused Prime Minister Mohamed Hussein Roble of being non-committal on expedited settlement of the current political impasse, adding that he should “minimize his foreign trips”. But Abdishakur denied knowledge of the letter.

Already, the AU has appointed former Ghanaian President John Mahama to mediate the Somali political problem. However, Mogadishu understandably writes to AU protesting Mahama’s appointment, arguing that he has a close tie with Nairobi.

Kenya and Somalia have not been best of friends with their diplomatic ties determining substantially. the two countries announced the restoration of their ties, only for Kenya to suspend direct flights to Mogadishu for unknown reasons.

According to Rashid Abdi, the opposition might regroup soon and return to Mogadishu, adding that Villa Somalia is not interested in finding an amicable solution to the problem, arguing that the opposition must act swiftly.

Damn right! I warned against hasty pullup without tangible progress. Disturbing reports of witch-hunts and extrajudicial killings of opposition soldiers. Roble warned against to go slow”, he said. ” Villa Somalia is preparing for confrontation not peaceful political settlement. It won’t take more than 24hours for opposition to remobilize”.

If Badbaado Qaran forces reconstitute and take over the city this time they will not stop, he added, saying “they will run Farmarjo out of town. Farmarjo wanted to be the first Darood president to finish term, hand over power without getting killed, overthrown or forced to resign. It looks like he will repeat history”.