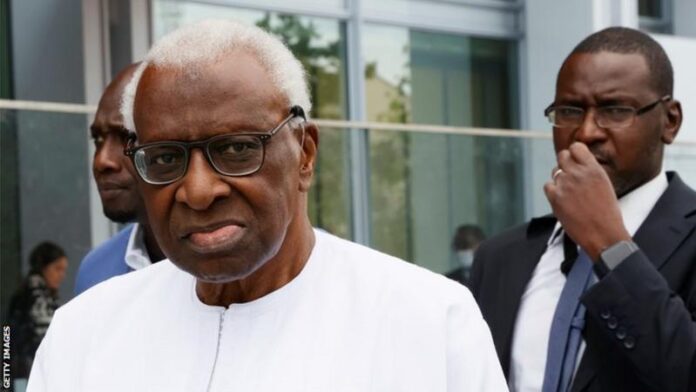 Senegal’s former World Athletics president Lamine Diack ‘is a worthy son of the nation’ according to the man who has organised to pay a surety to allow his return home.

Diack, who was head of athletics’ world governing body between 1999 and 2015, returned to Senegal on Monday for the first time since being placed under house arrest in France in November 2015 as he faced trial for corruption.

In September the 87-year-old was found guilty of corruption and money-laundering charges linked to the Russian doping scandal and sentenced to four years in prison, two of them suspended.

He has been allowed to return home after Cheikh Seck, the owner of Senegalese football club Jaraaf, paid a 500,00 euro bond that will ensure he continues to respond to summonses by authorities in France.

“We decided during an extraordinary general assembly that we shouldn’t have to wait collect money in the name of Diack, a worthy son of the nation, an all-round remarkable citizen,” said the businessman and former Senegal international goalkeeper.

“It (Diack’s return to Senegal) was a moment of joy and proudness, his time in France lasted for too long and the Jaraaf family is happy with this ending. You can imagine how happy he was and his reunion with his daughters.”

Diack was convicted of accepting bribes from athletes suspected of doping to cover up test results and letting them continue competing, including in the 2012 London Olympics.

Due to his age and health the French justice authorities also spared him from spending time in jail.

Despite the scandal Diack has always enjoyed support back home in Senegal with a group called the ‘Collectif Lamine Diack’ organising several demonstrations.

Globally Diack’s name will always be tainted after the corruption scandal but in Senegal he remains well thought of.

They first career saw him start as the 1958 French long jump champion before moving into sports administration and politics.

“The love Senegalese have showed for Lamine Diack has always been positive and never tainted to the point that one does not call into question either his probity, or what he represents in this country,” journalist Harouna Deme told BBC Afrique.

Another local journalist and former president of the Senegalese sports journalist union, Mamadou Koume, is very close to Diack.

“Lamine Diack represents a lot of things for people of my generation but also for the youth,” he told BBC Afrique.

“He has been always involved in sport. He was the technical director for the football national team of Senegal in the 60’s”.