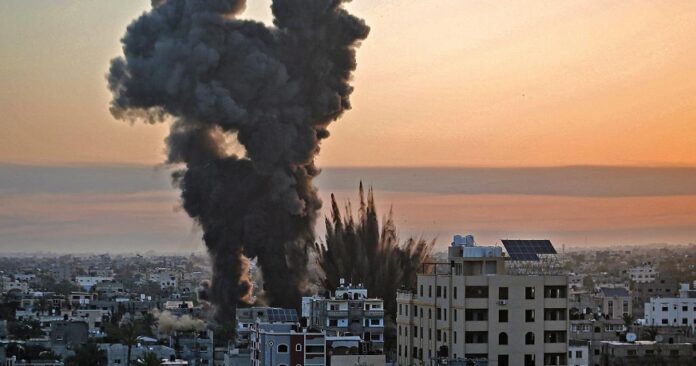 he devastating violence continues between Palestine and Israel.

Not only did Israeli forces blow up a 13-storey tower block in Gaza, but as of Wednesday morning said they had carried out a new series of strikes on the Palestinian enclave — where the ruling Hamas has reported the destruction of its police headquarters.

Israeli Prime Minister Benjamin Netanyahu appears to have chosen the path of vengeance.

“Hamas and the Islamic Jihad will pay for this, and they will pay a heavy price.”

On Tuesday, the African Union Commission Chairperson Moussa Faki Mahamat strongly condemned the bombardments in the Gaza Strip by Israel — in particular against worshipers in the Al-Aqsa Mosque.

As the attacks have killed numerous Palestinian civilians — including several children.

Not backing down on its end, Hamas says it has launched 200 rockets at Tel Aviv and Beersheba town.

Netanyahu has declared a state of emergency in Lod town.

“If (Israel) wants to escalate, we are ready for it, and if it wants to stop, we’re also ready, if they want to remove their hand over Jerusalem, we’re ready.”

According to the latest report from the Ministry of Health in Gaza, Israeli airstrikes on the enclave in response to rocket fire since Monday have killed at least 35 people, including 12 children.

Commanders of Hamas and Islamic Jihad, the second-largest Palestinian armed group in the enclave, were among those killed in the strikes, according to the movements.

In Israel, a total of five people were killed in the rocket attacks and dozens more were injured, according to police and emergency services.

More than 1,000 rockets have been fired by Palestinian armed groups from the Gaza Strip into Israel since Monday night, the Israeli military said Wednesday morning.

According to the army spokesman, Jonathan Conricus, 850 of the rockets were intercepted by the missile shield or fell on Israel, and 200 fell on the side of the Palestinian enclave.

The Israeli army also said on Wednesday that it had intercepted a drone from the Gaza Strip.

Its military is sending troop reinforcements to the Gaza border and has mobilized 5,000 reserve soldiers.

The outbreak of violence was triggered by clashes in East Jerusalem, the Palestinian sector of the Holy City — illegally occupied and annexed by Israel under international law.

Many in the international community continue to condemn the violence and call for peace.