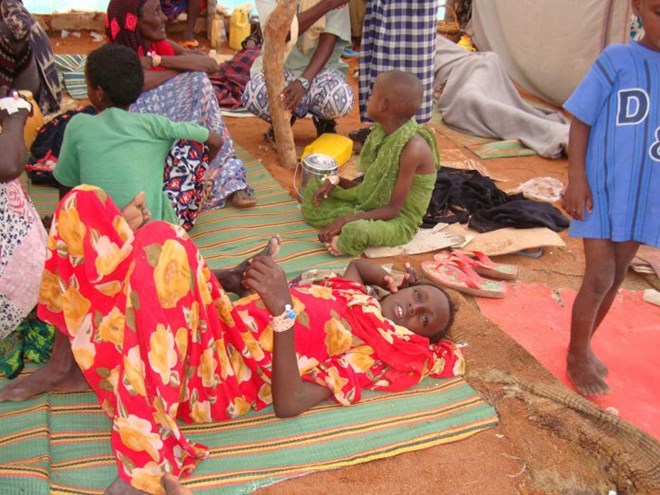 (ERGO) – Asli Abdullahi Mohamoud, a mother of eight, was displaced from her home in Bacaadweyne after conflict erupted between Galmudug administration and Al-Shabab militant group on 10 April 2021. She reached Mirji’lay, 50 km from Dhusamareb, on 5 May.

Asli has been sheltering under a tree with her children sleeping on a rug. The family lacks food, bedding, and water.

“My children are sleeping in the open cold with no blankets. I fled without carrying anything, not even utensils,” she said worriedly.

Asli lost 60 of her 65 goats when a rocket propelled grenade hit the barn where the goats were sheltering on 20 April.

Asli, her children and the five remaining goats have spent a week in the rural area of Bacaadweyne. She had to borrow $320 to pay for a vehicle to transport them to Mirji’lay.

“We need blankets, mosquito nets, utensils and tents to shelter from the rains,” she said.

The area administration, the elders of the host community, and the residents of Mirji’lay have helped the hundreds of displaced families with food and a room for some of them to shelter from the rain.

They were given 10 kgs each of flour, rice, sugar and three litres of cooking oil. The residents with two-roomed houses were asked by the administration to house displaced families in one of their rooms when it rains.

The request was well received by the host community. However, the large number of fleeing families reaching the area is making it impossible to shelter all of them.

Khalif Abdi Mohamoud and his family of 15 were among the first families to reach Mirji’lay in mid-April and were welcomed by the host community and given a room as well as food aid.

“You can feel the hardship one goes through when he flees all his property and comes to an area he knows nothing about,” Khalif told Radio Ergo.

He left behind 20 goats with a neighbour who stayed behind. He paid $300 to hire a vehicle to transport his family.

“My biggest worry is where I will go with my family if I am told to vacate the house I was given to shelter temporarily. We have nowhere else to go,” he said.

Mirji’lay commissioner, Yussuf Mohamoud Adan, said his office had registered 600 families displaced by the conflict reaching the area since 11 April. He noted most were women, children and the elderly.

Yussuf said his office could only request the host community to help the administration in helping the displaced families.

“With the help of our residents we took food on credit from local shops and have distributed it to the displaced families,” said Yussuf.