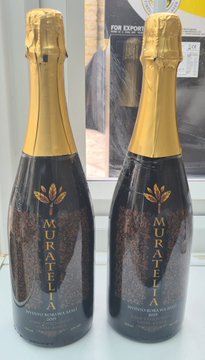 Kenyans are bemused by the news that a traditional alcoholic home brew which is not sold commercially at home is being sold in the UK.

UK-based businessman King’ori Mbaki Othaya, originally from central Kenya, is behind the move to sell a bottled version of muratina, a drink enjoyed by Kenya’s Kikuyu community

The fermented brew’s key ingredients include honey and a sausage-like fruit called muratina, which gives the drink its name.

It is being marketed in the UK as a wine spiced with honey – and Kenya’s High Commissioner to the UK, Manoah Esipisu, tweeted the news:

Some Kenyans online have said they are happy to see muratina appreciated at last – even if it will not be by lovers of the drink at home.

Other are upset that the bottled muratina will not be available in supermarkets at home.

“Instead they should be very ashamed of themselves that a shopper in UK can buy muratina in a supermarket but not in Kenya,” one person tweeted.

The drink plays a significant social and cultural role among the Kikuyu community, including during ceremonies to mark rites of passage.

But it has not been without controversy, and like other home brews its legality has been contested by the authorities.

In 2018, a judge ruled that the brew was legal as it was part of Kikuyu traditional customs – though no commercialized version of it is for sale in the East African nation.