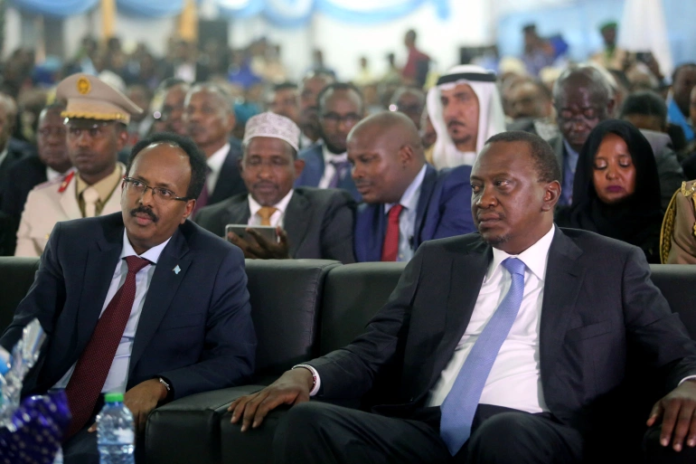 Somalia says ties cut after dispute will resume on the basis of ‘non-interference in each other’s affairs’.

Somalia has said it is restoring diplomatic ties with neighbouring Kenya after it severed relations in December, accusing Nairobi of meddling in its affairs.

Relations between the countries have also been tense over the ownership of potential oil and gas deposits, some of which lie off the coast of Jubbaland, one of Somalia’s five semi-autonomous states.

“The Federal Government of Somalia announces that in keeping with the interests of good neighbourliness, it has resumed diplomatic relations with the Republic of Kenya,” the Ministry of Information said in a statement on Thursday.

“The two governments agree to keep friendly relations between the two countries on the basis of principles of mutual respect for sovereignty and territorial integrity, non-interference in each other’s internal affairs, equality, mutual benefit and peaceful co-existence.”

The statement thanked Qatar Emir Sheikh Tamim bin Hamad Al Thani, whom it credited with playing a part in the reconciliation, and said the thaw had been welcomed by Kenya.

Nairobi said it took note of the statement and was looking forward “to further normalization of relations by the Somali authorities”.

“The ministry of foreign affairs acknowledges the continued support that has been extended from the international community, and in particular the government of Qatar, in efforts to normalise the diplomatic relations between Somalia and Kenya,” it said in a statement.

State House in Nairobi tweeted on Thursday afternoon that President Uhuru Kenyatta “received a special message” from Emir Al Thani that was delivered by Qatar’s special envoy of the foreign minister.

In an interview with Al Jazeera, Qatar’s Foreign Minister Sheikh Mohammed bin Abdulrahman Al Thani, said he hoped for the “continuation of normal relations between Kenya and Somalia” and said he encouraged the countries “to increase communications”.

“Qatar will follow this development in the relation and if there is a need to intervene we will welcome the continuation of supporting these efforts… We thank the president of Kenya and Somalia for their political will to resume the relationships between the two countries,” Abdulrahman Al Thani said.

“The tensions on the Somali Kenyan border was one of the reasons for cutting ties and both parties have the political will to end this tensions.”

Somalia cut ties on December 15 after Kenya hosted the leadership of Somaliland, a breakaway state not recognised by the central government in Mogadishu.

The country has long bristled over what it calls Kenya’s meddling in regions over its border, while Nairobi has accused Mogadishu of using it as a scapegoat for its own political problems.

In November, Somalia expelled Kenya’s ambassador and recalled its own from Nairobi after accusing Kenya of interfering in the electoral process in Jubbaland.

The pair have also engaged in a long-running territorial dispute over a stretch of the Indian Ocean claimed by both nations believed to hold valuable deposits of oil and gas, and have sought international arbitration over the matter.

The dispute over which nation controls access to the lucrative deposits escalated in early 2019 after Somalia decided to auction off oil and gas blocks in a disputed maritime area, prompting Kenya to recall its ambassador from Mogadishu in February of that year.

The two countries had revived ties in November of the same year.