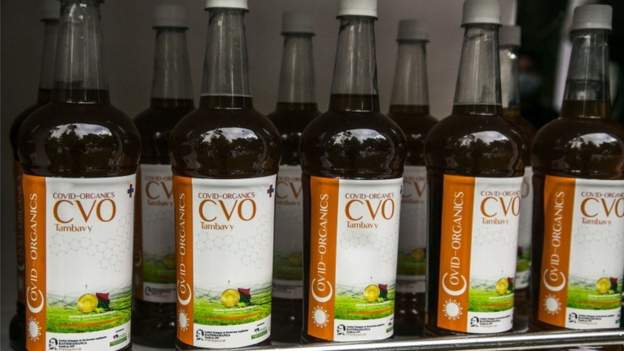 An opposition politician in Madagascar jailed for allegedly instigating protests against a herbal drink promoted by the president as a Covid-19 cure has lost his appeal, the AFP news agency report.

Harry Laurent Rahajason, an ex-communications minister, was sentenced to 44 months in prison last October. At the hearing he looked shaken by his time in detention, the news agency says.

He was arrested in July after two students were held by police for putting up a banner in the capital, Antananarivo, demanding the release of a student leader, it says.

The student leader was reportedly arrested the month before for criticising the Covid-Organics drink on Facebook.

President Andry Rajoelina launched the drink in April last year to great fanfare, though it has not been scientifically tested and the World Health Organization has warned against its use.

Produced by the Malagasy Institute of Applied Research from the artemisia plant – the source of an ingredient used in a malaria treatment – and other Malagasy plants, it was marketed as a prevention and remedy.

Rahajason denied any link to the protesters.

“I am a journalist by training. I have two radio stations… Why today would I pay young people to ask for the release of a person I do not even know?” AFP quotes him as saying.

His sister, Bodo Fabre, was distraught when she spoke to AFP about the ruling, accusing the appeals court of bias.

The Indian Ocean island has recorded more than 38,600 coronavirus cases, including at least 701 deaths – and has experienced a recent surge.

In has been reported that schools and hotels have been transformed into hospitals to cope with the surge, blamed on the South African variant.

The country has now joined the global vaccine-sharing scheme Covax, and is expected to receive it first batch of jabs soon.