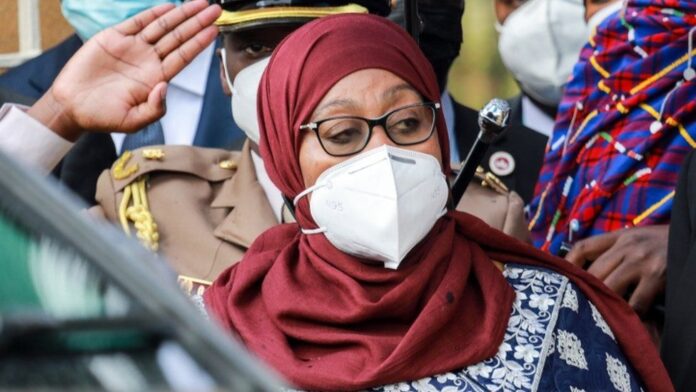 Tanzania’s new President Samia Suluhu Hassan has been on a charm offensive – trying to mend relations with neighbouring Kenya, which took a battering during her predecessor’s time.

John Magufuli, who died in March, was a prominent coronavirus sceptic and the late president’s controversial stance led to Kenya closing crossing points along their 750km (465-mile) border at one stage.

But while on a two-day visit to Kenya, Mrs Samia broke with her custom in Tanzania and wore a face mask the whole time.

During her speeches, some in the Swahili language that the two countries share, she delighted business leaders and MPs with anecdotes and punchlines.

Here are five of her best quotes:

The 61-year-old president acknowledged her visit was taking place during a “most difficult time… when we are facing the global pandemic Covid-19”:

“We’re here everybody with masks on our faces – and when I see people with masks on faces it reminds me in our village, when we go and do the herding with the goats, we protect them [with a muzzle] from eating the crops on the way… so we cover them the same way we are doing today… we have to do it.”

Keen to emphasise the importance of trade between the East African neighbours, which stands at more than $450m (£324m) annually, she used the example of a wildebeest crossing from Kenya’s Maasai Mara to the Serengeti in Tanzania to make her point:

“God has blessed these two countries to be neighbours. We have land and sea borders. And even our ecology is one. Even our animals are family and neighbours.

“There are these animals wildebeests, that come to get pregnant in Kenya and deliver in Tanzania… Now, if the animals had citizenship, what nationality would they be?”

Tanzanians, especially those from Zanzibar like President Samia, tend to speak what is regarded as “pure” Swahili. Kenyan Swahili on the other hand is more colloquial – regarded by some as sloppy and uncivilised, and is often the subject of amusement between the neighbours:

“We were very pleased with your decision to begin using the Swahili language in parliament. That is what makes me listen to Kenya’s parliamentary proceedings – I love your Swahili. Your Swahili has a lot of teasers. Those alone are sufficient entertainment.

“I was listening as the speaker struggled to name the numbers of the year in Swahili.”

She made a play on her name and that of her Kenyan counterpart, Uhuru Kenyatta, to urge businesses to boost trade links:

“You are lucky that between our two countries, on one side you have ‘Uhuru’ [Swahili for freedom] to do business and on the other side there is ‘Suluhu’ [Swahili for solution] to remove trade barriers. The task is now on you.”

Mrs Samia made reference to the nightlife and other enjoyments the Kenya capital has to offer – but which has been curtailed because of the Covid-19 overnight curfew:

“I have established that a huge section of the delegation that I came with knows the alleys of Nairobi. They know where they can find ‘nyama choma’ [Kenya’s roast meat delicacy).

“But because of corona, they could not enjoy themselves. I am worried some of them may remain behind.”

After years in hiding the late Libyan leader’s son is ready to announce his return to public life, say aides