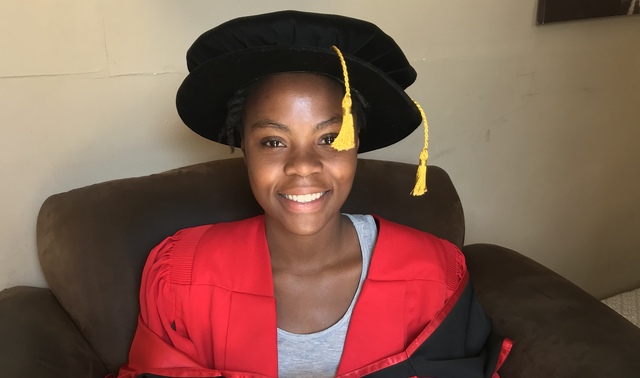 Lindiwe Tsope, 27, has become the first pupil from Oprah Winfrey’s school in South Africa to achieve a PhD.

The sociology graduate told TimesLive she was “still processing the depth of it. It’s a huge milestone. It’s not my milestone, but my family’s and the community’s milestone”.

She also told IOL that that her PhD research at Rhodes University “was the first of its kind” there, and focused on “lived experiences of both students and support staff living with HIV and Aids at the university”.

Ms Tsope has given special thanks to Oprah Winfrey, calling her the “driver” of her dreams, and said starting out as part of the philanthropist’s first class in 2007 to now becoming “the first person to get a doctorate is a full-circle moment for me”.

The Oprah Winfrey Leadership Academy – in the small town of Henley-on-Klip south of Johannesburg – educates girls from poor families.

When it opened 14 years ago, Winfrey herself interviewed many of the 3,500 South African girls from low-income families who applied for an initial 150 places at the school.

A poet seeks a line in Somalia presidency