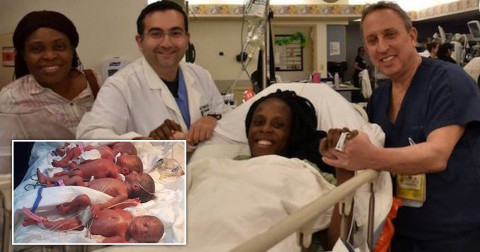 A Malian woman has given birth to nine babies, in what would be an extremely rare case.

Halima Cisse, 25, gave birth on Tuesday to five girls and four boys in a Moroccan hospital where she had been admitted, the Malian Health Minister Fanta Siby said in a statement. The deliveries were done through Caesarean section.

Ms Cisse had been expected to give birth to seven babies based on the ultrasound scans done in Mali and Morocco that apparently did not detect the two extra babies.

On Tuesday, Dr Siby said the newborns and the mother “are all doing well”. They are expected to return home in several weeks’ time.

She congratulated the medical teams in Mali and Morocco, “whose professionalism is at the origin of the happy outcome of this pregnancy”.

Ms Cisse’s pregnancy has fascinated the West African nation and attracted the attention of its leaders – with authorities having flown her to Morocco when she needed specialist care, the Reuters news agency reported.

A Moroccan health ministry spokesman, Rachid Koudhari, told the AFP news agency that he had no knowledge of such a multiple birth happening in the country.Article share tools