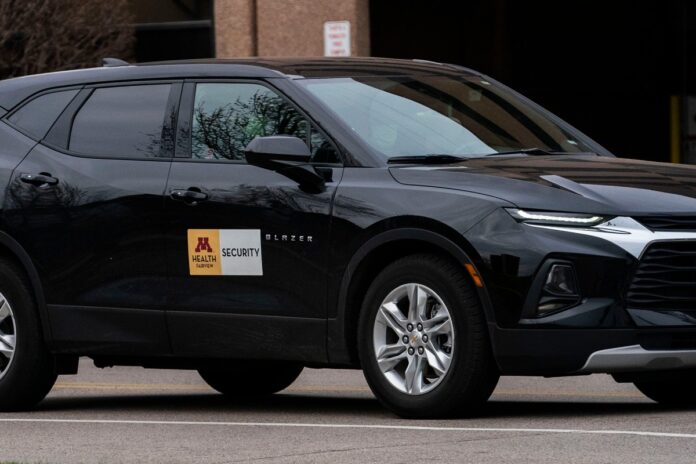 On Friday afternoon, Kayseh Magan, an investigator with the Minnesota Attorney General’s Office, went to M Health Fairview’s University of Minnesota Medical Center to drop off a legal document.

The process should have been routine. But what unfolded, both Kayseh and his attorney Zorislav Leyderman say, was an act of discrimination against him from a Fairview security officer.

Now, Kayseh, who is Somali, plans to sue. His attorney said they will pursue discrimination and false arrest charges against the health provider. Kayseh works in the Medicaid Fraud Control Unit, which uses federal money to investigate allegations of fraud, abuse, and misappropriation of Medicaid money by health providers. He has previously worked as a correctional officer, a juvenile detention officer, and as a specialist helping underrepresented clients navigate the legal process for the Minnesota Judicial Branch.
In an interview with Sahan Journal, Kayseh said the incident has shaken him.

“It just tells me that it doesn’t matter what your job title is, even if it’s investigator, or if your employer is the Attorney’s General Office,” Kayseh said. “If you’re Black in America, you’re going to face discrimination.”

Fairview spokesperson Aimee Jordan said in a prepared statement that “we regret to learn of any negative experience by an individual visiting an M Health Fairview facility for any reason.”

She added, “We have initiated a thorough review of the situation and any evidence that the response by our security personnel was inappropriate will be addressed.”

The alleged incident occurred last Friday around 1:00 p.m. outside the Minnesota Medical Center, which contains Fairview’s corporate office and a hospital and is located in the Cedar-Riverside neighborhood. That morning, Kayseh said he had been in touch with an attorney from Fairview, alerting her that he was going to serve a legal document.

Kayseh said the Fairview attorney instructed him to serve the document at the corporate office. When he arrived there, Kayseh said he introduced himself to the front desk clerk and told her that he had a legal document to serve (Kayseh would not comment on the contents of the legal document.)

Kayseh said he was wearing a polo shirt with the words, “Medicaid Fraud Control Unit,” embroidered on it and a visible work ID badge. The receptionist could not get a hold of the Fairview attorney, and Kayseh said he called two of his supervisors for instructions.

Kayseh said both supervisors told him to seal the envelope containing the legal document and leave it at the front desk. Kayseh said he did this, following his supervisors’ instructions. That’s when the receptionist allegedly told Kayseh that he could not leave the document there. Kayseh said he responded, “You’ve been served,” and left the office.

Kayseh cited a state statute that authorizes him to serve the legal file the way he did. The statute reads, “In the absence of any person, the officer must leave such copy of the warrant and receipt in the place where the property or things were found.”

A confrontation with security guards

After serving the file and exiting the building, Kayseh said a car with at least two Fairview security guards stopped in the street in front of him.

“One of the security officers came over and physically ripped his badge off of his waist,” Leyderman, the attorney, told Sahan Journal. “They wanted to interrogate him about who he was and what he was doing. He was scared and cooperated the best he could.”

This security officer was a white male, according to Kayseh. Kayseh, who described himself as the only Black investigator in the Medicaid Fraud Control Unit, said he believed the security officer treated him wrongly because he’s Black.

Kayseh said he explained who he was and what he was doing. When the security officer realized Kayseh was from the attorney general’s office, Kayseh said, he accused him of being unprofessional and throwing the papers at employees inside the building.

Kayseh said security camera footage from the building’s lobby will show that he simply placed the sealed envelope on the counter. Leyderman said he has already filed a notice with Fairview to preserve the video footage of the encounter to examine in a pending suit.

After the security guard inspected Kayseh’s ID, he allegedly told Kayseh that he was going to file a trespassing order against him. The security officer also wrote down Kayseh’s license plate number, according to Kayseh’s account.

The Fairview representative, Aimee Jordan, offered a different account. In her statement, she said that “as a result of a miscommunication,” Kayseh went to a part of the hospital “where we do not accept documents.”

Kayseh then left the documents “at an improper location and began to leave the premises.” A security officer tried to return the documents to Kayseh, told a supervisor, and followed Kayseh out the building. Additional security officers came to the scene, “following security protocol,” Jordan said. “After a review of the individual’s credentials by security the person walked to their car and departed,” Jordan said.

Jordan added that the incident came during a week of “heightened security around our community” following the Derek Chauvin trial and also during a time when “COVID visitor restrictions have made it difficult for individuals who are not seeking medical care to enter and navigate our facilities.”

Leyderman, however, asserted that this incident is a clear act of discrimination against someone trying to do his job. After the incident, Kayseh called Minneapolis police to report what happened.

Minneapolis Police Department spokesperson John Elder confirmed that an investigator with the attorney general’s office requested that a police officer document the incident. Elder said the officer did so, but did not file an official police report.

Sahan Journal has not yet seen police documentation of the incident, but has filed a public records request seeking the material.

Kayseh said his office has since been in touch with Fairview asking the company to explain the security guard’s actions. He said Fairview has since offered “multiple conflicting statements” to the attorney general’s office on the matter.

“I stand with my colleagues who have reason to believe their civil rights were violated,” Ellison said. “They have the right to make a complaint and I fully support them doing so.”

Leyderman said that Kayseh has suffered embarrassment and humiliation as a result of the alleged incident. He adds that Kayseh was fearful during the parking lot confrontation. Leyderman laid out plans in the coming days to file a lawsuit in Hennepin County district court. The suit will likely allege Fairview committed racial discrimination, national origin discrimination, false arrest, and battery and assault.

Kayseh said the incident caused him sleepless nights. “For something as routine as that to explode the way that it did, it was the last thing that I expected,” he said.

This week, Kayseh took two days off work to process the event and prepare for litigation. On Wednesday, he plans to go back to work.