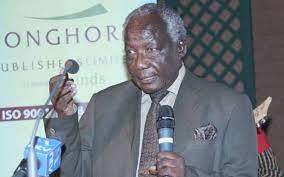 Kenyans have been mourning veteran journalist Philip Ochieng who died on Tuesday aged 82.

Mr Ochieng was a masterful storyteller and a stickler for good grammar.

His weekly column became an intellectual space for those who sought incisive analysis on the country’s politics and social issues.

The Sunday Nation column was a must read, it was especially popular among young journalists who wanted to improve their diction.

His colleagues and the journalists he mentored knew that he expected nothing short of good grammar – and he would chide anyone who came short.

When critics accused him of verbosity, he dismissed them as “average readers,” when the religious community complained about irreverence in his work, he wrote at length about his pride as an atheist.

A poet seeks a line in Somalia presidency