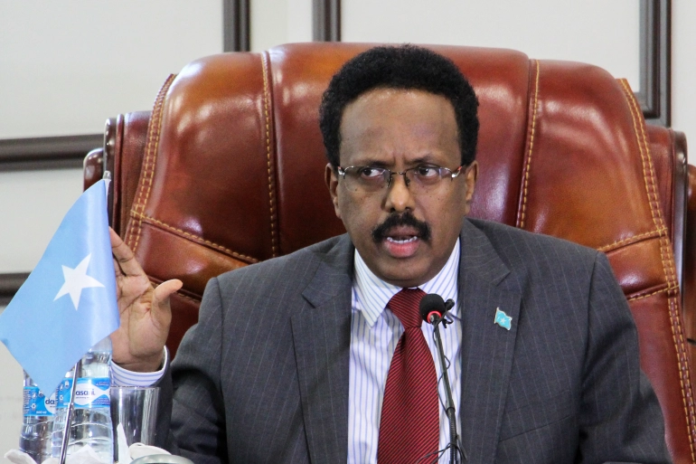 After clashes in Mogadishu and political pressure, President Mohamed Abdullahi Mohamed said he would step aside.

Somalia’s President Mohamed Abdullahi Mohamed announced he will not attempt to extend his term by two years, bowing to domestic and international pressure after clashes in the capital Mogadishu split security forces along clan lines.

The president’s term expired in February, but the country failed to hold elections as planned. Earlier this month, the lower house of parliament voted to extend Mohamed’s four-year term by another two years.

The Senate rejected the move, provoking a political crisis.

Somali military personnel supporting opposition leaders rest along a street in Mogadishu, Somalia [AFP]
Commanders in the police and the military defected to the opposition, and rival factions of the security forces fortified positions in central Mogadishu, raising fears of heavy fighting in the heart of the capital, and a security vacuum in the surrounding areas that could be exploited by al-Qaeda-linked al-Shabab fighters.
‘Foreign entities’
In a televised statement early on Wednesday, the president said he commended the efforts of the prime minister and other political leaders and welcomed the statements they issued calling for elections to be held without further delay. He also called for urgent discussions with the signatories to an agreement signed last September on the conduct of the vote.

The opposition, which demanded the president to resign, did not immediately respond. The president did not discuss the opposition in his speech, but denounced unnamed “individuals and foreign entities who have no aim other than to destabilise the country”.

The heads of two regional states who had been staunch allies of the president also rejected on Tuesday the proposed two-year extension of Mohamed’s term. Those leaders said in statements immediately after the president’s speech they welcomed his announcement.

Play Video
Prime Minister Roble backed that joint statement and called on security forces to return to their barracks. He also urged opposition leaders to stop any actions that could harm Somalia’s stability.

This week, opposition forces abandoned positions in the countryside as they headed for a showdown in the capital, allowing al-Shabab to take over at least one town.

Forces loyal to the opposition hold important parts of Mogadishu and clashed with government forces over the weekend, raising worries the country could return to an all-out war.

Some residents fled, worried that Somalia was again collapsing into conflict after years of trying to rebuild from its devastating civil war.

The president said he urged “all security agencies to maintain the stability of the capital and the safety of innocent civilians, avoiding any actions that may lead to insecurity”.

Residents flee from their homes after recent crashes between Somali security forces [AFP]
Somalia’s election was delayed amid disputes between the federal government and the states of Puntland and Jubbaland along with the opposition.

The president, a former US citizen who gave up that status while in office, tried to defend his actions on the election standoff in a recent interview with his former local newspaper, The Buffalo News, asserting Somalia “cannot afford a power vacuum”, and the extra time would allow officials to organise the first one-person-one-vote direct election in decades.

He added, “Who can lead if we leave?”

‘Teetering on the brink’
The latest unrest is the second bout of violence in Mogadishu over the proposed extension to Mohamed’s term.

“Somalia is teetering on the brink of a major breakdown once again,” it said in a briefing published on Tuesday.

Somalia’s fledgeling armed forces are drawn from clan militias that have often battled each other for power and resources.

Mohamed is Darod, one of Somalia’s main clans. The majority of the Somali military in the capital are Hawiye, another large clan. Most of the opposition leaders are Hawiye.

When asked if he would peacefully hand over power if someone else is elected, the president in his interview with The Buffalo News replied, “Absolutely, without any hesitation.”