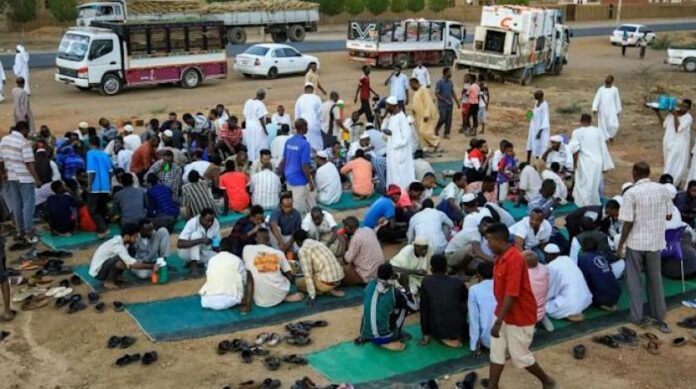 As night falls in Sudan, villagers rush to pull over travellers with a friendly roadblock of hospitality celebrating Islam’s holy fasting month of Ramadan, traditions enduring despite dire economic troubles.

Rugs are rolled out on the roadside verge in an impromptu al fresco dining room to celebrate iftar, the fast-breaking evening meal to mark the end of a baking hot day without either a mouthful of food or a drop to drink.

“This is a custom that our grandparents began,” said Aboulmaali Mohamed Ibrahim, offering a meal in the village of Nuba, some 50 kilometres (30 miles) south of Sudan’s capital Khartoum.

“They began inviting travellers for meals following the construction of this road in the 1960s.”

To fasting travellers, the meal is a much-welcomed break from their exhausting long trips on Sudan’s often rutted roads.

But to residents living in villages along the road, it is part of upholding Sudan’s long-held traditions of hospitality to strangers and, amid a tough economic crisis, proof that the important things in life must remain the same.

The call for the evening prayer announces the end of another fasting day.

A feast is provided. Parched travellers, struggling after a day in the sun without liquid, are firstly handed a cool and refreshing squeezed juice.

Jugs of the local speciality “hilw-mor”, or “bitter-sweet”, a drink spiced with ginger and cinnamon, is also poured into cups.

Then an array of traditional food ranging from porridge to plump dates is placed out for all to share.

While some villagers are laying out the food, others are still busy waving to stop cars and buses on the busy highway, encouraging people to stop and join.

Ibrahim, despite struggling with the meagre income he earns as a teacher, has insisted on sharing his iftar meal every day since Ramadan began on April 13.

“We just bring whatever we have to the iftar table, no matter how little it is,” he said.

Sudan has been struggling since the April 2019 toppling of hardline president Omar al-Bashir, following protests against his rule triggered by economic hardship.

Inflation last month shot up over 330 percent, the government said.

People now often queue for hours to buy basic foods or to fill their cars with petrol.

Households suffer from frequent power cuts, and gas canisters for cooking are often hard to find.

The transitional government, which came to power after Bashir’s ouster, has embarked on painful reforms hoped to rebuild the economy.

In February, it introduced a managed float to the local currency in an attempt to close the yawning gap between the official and black-market rates.

Other bold measures include reducing costly subsidies on fuel and other commodities.

But others fear the measures risk fanning popular discontent before coming to fruition.

Mudather Saad, another villager from Nuba, says they typically host around 150-200 travellers to the iftar meals each evening — but on busy nights even more.

“Our guests sometimes exceed 300 — especially on weekends,” said Saad, as he joined other villagers to block the road and beckon travellers to eat.

With only minutes to go before the call to prayer, Saad and others flag down a bus packed with some 60 passengers.

“I never worry about missing iftar,” Hussein said. “I am always sure someone will offer us something on the way.”