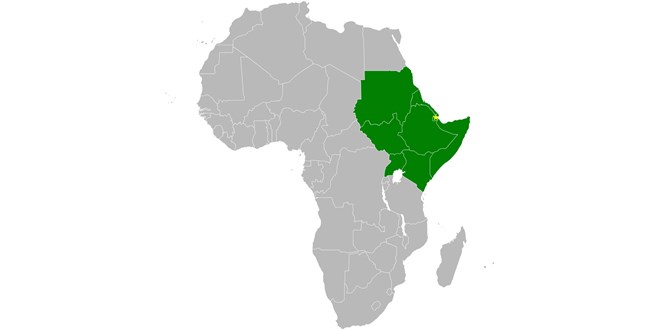 Mogadishu (HOL) – Mogadishu (HOL) – The Intergovernmental Authority on Development, an eight-country multinational bloc in East Africa, has called on Somali stakeholders to sit down with the federal government in a process and give the “new initiative a chance.”

The comments came in a press release where the group said that dialogue would be the only solution to this electoral crisis.

“IGAD encourages all stakeholders to give the new initiative a chance, and re-engage in an open, frank and constructive dialogue in the best interest of the people of Somalia and with a view to unlocking the political statement. IGAD reiterates that dialogue remains the best option for national cohesion, inclusive politics, peacebuilding, reconciliation, human security and stability.”

The statement did not outline the proposed plan but urged Somalia’s leaders to refrain from action that would escalate an already tense political situation.

“IGAD strongly urges all Somali leaders to exercise maximum restraint and refrain from any actions that will further escalate tensions or lead to confrontation; and in this regard, calls upon all stakeholders to prioritize dialogue in their political aspiration.”

While the statement also does not outline the proposed plan, it does appear to have at least some tacit support from at least some UN Security Council members, who met up on Tuesday for an informal interactive dialogue on Somalia. The Ambassadors of Ireland and Norway announced that they appreciated the leadership role of the African Union and IGAD in mediating the conflict. It is worth noting that the Ambassadors voiced their support for the September 17 agreement.

The AU’s Peace and Security Council (PSC) will convene on Wednesday to discuss the political crisis in Somalia. They are expected to discuss the term extension at length.

The PSC is expected to discuss whether Somalia’s term extension violated Article 23 (5) of the African Charter on Democracy, Elections and Governance, which bans unconstitutional government changes.

The mandate for Somalia’s legislative and presidential elections expired in December 2020 and February 2021, respectively.

Farmajo travelled to the capital of the DRC over the weekend, where he requested the African Union to facilitate talks with political opponents and various stakeholders. While meeting with President of the Democratic Republic of Congo (DRC), Felix Tshisekedi, who is also the 2021 African Union Chairperson, Farmajo proposed “African solutions for African problems” during his one-day visit. Somalia’s Ministry of Foreign Affairs emphasized that it would be a Somali-led and Somali-owned process. It is unclear if IGAD or the AU will play a role as external mediators as they facilitate talks between stakeholders.

The IGAD statement comes at a pivotal juncture as criticism against Farmaajo’s term extension grows louder.

Over 400 Leaders from Mogadishu’s most prominent clan, the Hawiye, met on Monday to pass a resolution that rejected President Farmajo’s two-year term extension.

The statement said that the participants have agreed to collectively not recognize Mohamed Abdullahi Farmajo as Somalia’s legal head of state. The group added that they would take action against Farmajo if the harassment of Hawiye politicians continues.

On Tuesday, members of the National Salvation Forum, many of whom were present at the Hawiye forum, wrote to the President of the UN Security Council ahead of the informal dialogue urging the world body to reject the mandate extension. 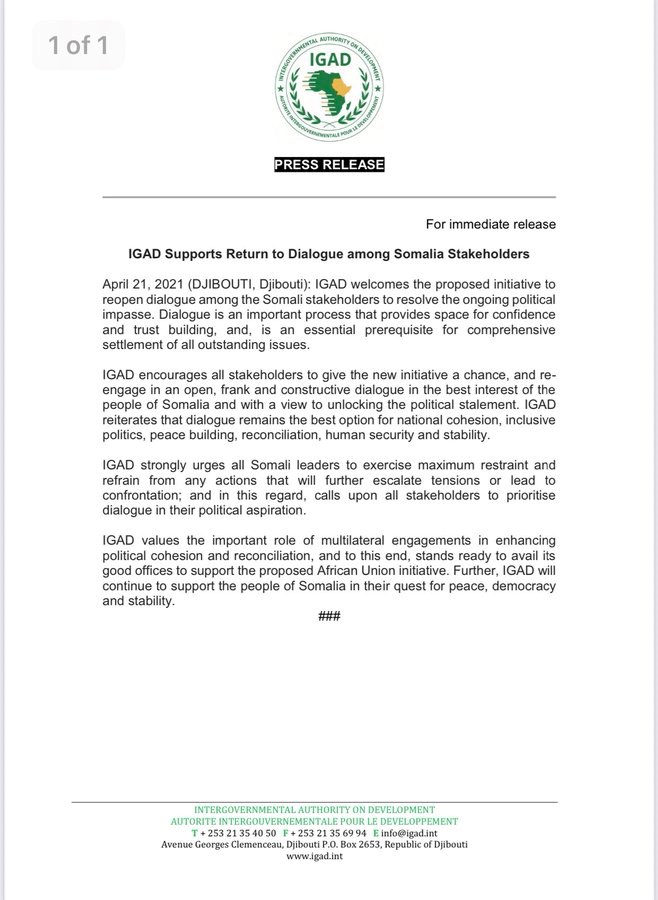