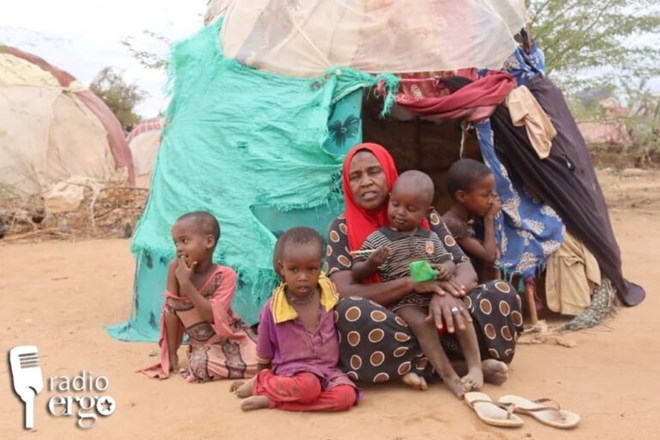 Halimo was among the 600 destitute families in Webi-yarow IDP who lined up to receive packets of dry food aid distributed to help them through the month of Ramadan.

“This is the first time I have received food aid in the three months I have lived in this camp!” Halimo said, as she received the five kilograms each of flour, rice, spaghetti, and sugar and one and a half litres of cooking oil, handed out by Turkish NGO, Hasene, supported by the European Union, on 6 April.

Halimo, the sole breadwinner of her family, earns a maximum of around two dollars a day doing laundry jobs. She manages to pay the $15 primary school fees for one daughter, but cannot afford education for the other children. She moved to Webi-yarow camp in Kahda district in January, hoping to find support and services.

“Sometimes I wash clothes for families in the city. Other times I ask help from friends who are better off, and at times I make brooms and sell them in the market,” she said.

However, Webi-yarow camp has no water supply, no school, and no health facility.  Life is hard to the camp residents and the food handouts by Hasene were a one-off.

Adan Roble Gacal, 72, with a family of 16 members, was also there to receive the dry food distribution.

“The food donation we received wouldn’t last us for long since we have a big family,” said Aden.

Adan has been displaced since September 2020, when the family fled their 16-hectare farm in Janale, Lower Shabelle, after invasions by that destroyed their crops.

He feels they led a good life relying on income from their farm but now they have been reduced to poverty.  As he is elderly he is unable to work, so the family depends on the $2-$4 brought home by three of his sons currently working digging trenches.

Six of Aden’s children were studying at a Koranic school but had to drop out when he defaulted on the fees.

“We lack a lot of necessities here. We even need a toilet, as we have to go and relieve ourselves in the bushes. We also need a good shelter to protect us from the heat and cold,” he complained.

Most of the IDPs in the camps are worried about shelter as the seasonal rain begins. Habibo Taran and her daughter and grandchildren depend on three to four dollars a day earned by three of the youngest boys working as shoe-shiners.

“Our hut is in a poor state and we don’t have tents to shelter. We are asking goodwilled people in the city to help us,” she said.

The family fled conflict in Barire, Lower Shabelle, in 2017. Like most in Webi-yarow camp, the Ramadan donation of food was the first time they had received any aid.