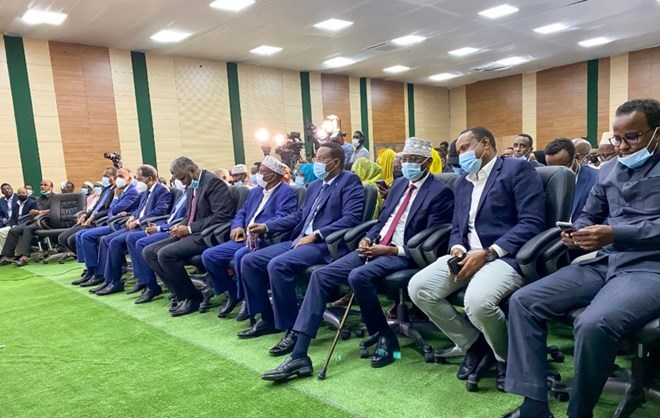 Over 400 powerful members of the clan attended the meeting, including two former presidents, a former prime minister, lawmakers and clan members.

The statement said that the participants have agreed to collectively not recognize Mohamed Abdullahi Farmajo as Somalia’s legal head of state. The group added that they would take action against Farmajo if the harassment of Hawiye politicians continues.

Here are the points raised in their communique:

1.) It is illegal that the Members of Parliament – whose own mandate expired – voted to extend the ex-President’s term for two years. For that reason, we will not recognize President Farmajo.

2.) To immediately retract the illegal term extension for both the Parliament and President. We have to block every effort to cement the term extension.

3.) To return to the September 17 agreement, as it is the best path to elections. To call for an immediate meeting between the Federal Member States and political stakeholders without being constrained by the President’s attendance, who’s expressed that he is not interested in holding an election.

4.) The President and the Lower House of Parliament will be held responsible for the consequences of the illegal extension.

5.) We are calling on members of the Somali National Army not to be a part of politics. We explicitly warn the Chief of the Armed Forces, The Police Chief, who is currently busy implementing the extension.

6.) We are against the position of some regional states who are supporting Farmajo’s extension. We are informing them (FMS) that the Somali people, in their respective regions, are unsupportive of that initiative. We are urging them to backtrack the decision immediately.
The leaders of these regional states will be held responsible for any insecurity caused by this decision.

7.) This forum would like to express its appreciation to Puntland and Jubaland, the Upper House of Parliament, the Council of Presidential Candidates and the international community, who have strongly voiced their opposition to the extension, which will hinder the nascent democracy.

8.) This forum would like to inform the AMISOM peacekeeping mission to be mindful that the ex-President’s term has expired, who is engaged in inciting discord and violence.

9.) We call the Somali people to reject this illegal term extension and be united in defending the existing policy of going to the polls every four years. Elections form the basis of nation-building and democratic values.

10.) The forum would like to express its gratitude to the international community for its unwavering support to the Somali people.

The Hawiye clan conference comes amidst growing local pressure against President Farmajo’s two-year extension granted to him by the Lower House of Parliament on April 12.

On Tuesday, members of the National Salvation Forum, many of whom were present at the Hawiye forum, wrote to the President of the UN Security Council urging the world body to reject the mandate extension. The letter came as the Security Council was preparing to hold a closed-door, off-the-record discussion, known as an informal interactive dialogue (IID). The UK, the penholder on the Somalia file at the Security Council, was called the Security Council, which previously warned that a unilateral extension would damage the credibility of Somalia’s leadership.

In their four-point communique, the NSF echoed many of the same demands that the Hawiye leaders called for and that it might form a parallel government.

President Farmajon asked the African Union to facilitate talks between political stakeholders over the weekend when he travelled to Kinshasa for a brief one-day visit with the President of the Democratic Republic of Congo (DRC), Felix Tshisekedi, who is also the Chairperson of the African Union for the year 2021. Farmajo called for “African solutions to African problems” and emphasized that any talks would be “Somali-led and Somali-owned” dialogue.

The Hawiye is a prominent Somali clan that traditionally inhabits central and southern Somalia, the Somali Region, and the North Eastern Province. They are also the majority in the capital city, Mogadishu.