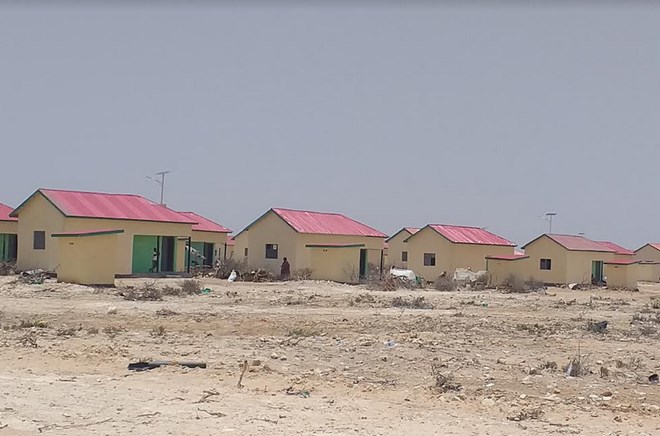 (ERGO) – Thousands of people affected by repetitive river flooding in the town of Mustahil in Somali Regional state of Ethiopia, close to the Somali border, have been moved to permanent new homes on higher ground by the Ethiopian authorities.

A total of 4,700 families were resettled in February to land they were given in Mustakim in Shabelle zone, where the most vulnerable 900 families also had houses built for them.

Adan Haji and her destitute family, who had been living in a makeshift hut for more than a year, moved into a new two-roomed house built of corrugated iron and wood with a toilet.  She gets free water from a nearby public tap and has enrolled four of her nine children in Mustahil primary and secondary school in Mustakim.

“Our life has changed immensely,” she told Radio Ergo excitedly. “We were given utensils when we relocated here, and we were also told where we could get our water from.  We have everything here and we thank the authorities and aid organisations who relocated us here.”

In October 2019, Barr lost 32 goats and three cows as well as their two-roomed house in the flooding. They moved to Mustahil IDP camp, where they lived on half a kilo of rice, half of sugar, half of flour and oil distributed monthly by the UN’s International Organisation for Migration (IOM).

“For more than 15 years, me and my children lived in fear during the rainy season, but now we sleep without any worries,” Barr said.

She has started selling vegetables, earning about a dollar a day, to supplement the food aid they are still receiving from IOM.

Mustahil commissioner, Said Ugas Ali, told Radio Ergo that relocating the families was the only solution to the flooding problem. Ten people were killed in the 2019 floods and a large number of families lost their property and were forced into displacement camps.

Plans to urbanise and develop services in Mustakim, 20 kilometres away from the river, began in early 2020. IOM helped the authorities in the construction of Mustakim’s roads, school, and water installation.

“Every family received a plot that is the same size as the one they owned in Mustahil. No one was forced to relocate,” said the commissioner.

The commissioner noted that they are now working to complete a new health centre in Mustakim. Since January, more than 1,500 trees have been planted in the town.

Adan Abdullahi Hussein, a farmer, built a house on his new 20 by 20 metre plot in Mustakim, where his family of seven moved in February. Twice a year in the rainy seasons, they used to evacuate their home in Mustahil due to flooding. Although they left behind three houses and four hectares of farmland, they feel much better off in Mustakim.

“I don’t regret moving away from Mustahil because we are now living in a safe town. We don’t fear floods anymore,” said Adan.

Abdifatah Osman Bare, an environmental scientist and lecturer at Jigjiga University, told Radio Ergo that Mustahil, which has existed for more than 50 years, was never suited for human settlement.

“The river runs through Mustahil and water levels in the river have been increasing every year to new highs,” said Abdifatah.

He added that Mustahil would not become a habitable town again and only farmers, like Adan, would be going there to carry on their farming activities, whilst residing in Mustakim.