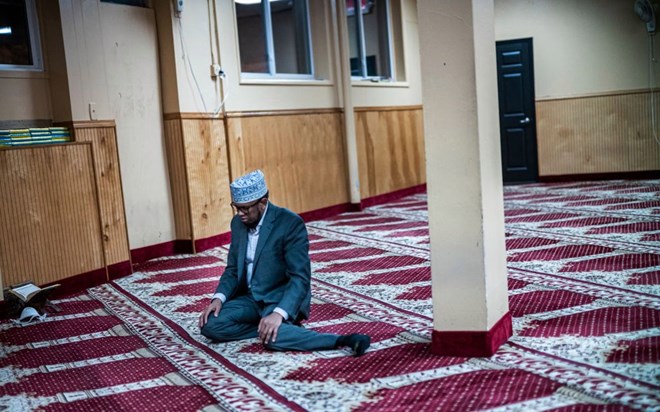 Muslim community leaders and elected officials sprung into action Monday evening after a curfew was announced for several counties, and the Twin Cities remained in a state of emergency in response to the police killing of Daunte Wright.

Elected officials updated the regional curfew to exempt those traveling to and from prayer.

Residents expressed concern about police enforcing a curfew during Ramadan as as young Black Muslims traveled to prayer. Curfew was set at 7 p.m., with prayer scheduled to begin after 8 p.m.

AJ+ reported the curfew would have forced Muslims to stay indoors instead of traveling to the nightly Taraweeh prayer. According to AJ+, some residents said gathering for prayer would provide solace during yet another police killing of a Black person in the Twin Cities metro area.

But some advocates argued that announcing the curfew without consulting the Muslim community leaders and elected officials violated the First Amendment.

“On the eve of Ramadan, our community has been traumatized by the trial of Derek Chauvin and now the murder of Daunte Wright,” said CAIR-MN Deputy Director Mohamed Ibrahim in a statement. “Nothing can bring solace and hope tonight better than gathering with our fellow Muslim community members in prayer. Denying Minnesota Muslims this right violates our First Amendment rights. The order must be amended.”

Rep. Ilhan Omar reached out to state and local officials, imploring them to rectify the situation. Officials announced an exemption shortly thereafter. Muslim organizations and community leaders continued to clarify the exemption for those traveling to and from prayer.

Data from Pew Research Center estimated that 20 percent of Muslims in the U.S. are Black. About half are converts to Islam. The Minneapolis area also has a large Muslim population, due to the migration of Somali residents.

The concern held by Muslim residents in the region is understandable given the history of Minneapolis’s surveillance and profiling. In June, the Progressive published a look at the targeting of Minneapolis’ Muslim community dating back to a 2014 Obama-era program of which Minneapolis was one of three pilot cities.

Initially marketed as a Health and Human Services program, the Countering Violent Extremism program targeted Somali residents of Minneapolis predominantly. It has since been replaced with a new program administered by the Department of Homeland Security called Targeted Violence and Terrorism Prevention which provides grants for state and local agencies and nonprofit groups. DHS recently announced $20 million in grants for FY 2021. Individual grant awards are not to exceed $2 million.

According to the Brennan Center, these types of programs are divisive and discriminatory despite claims of trying to help people stop from becoming extremists. The Brennan Center also explained counterterrorism agencies built the programs on a disproved theory of alleged predictive indicators.

Ramadan in a pandemic has been challenging enough without having to worry about safety from police profiling and harassment. In the days leading up to the start of the Islamic holy month, mosques set up vaccination sites across the city. Close to 7,000 vaccines were administered before the start of Ramadan.