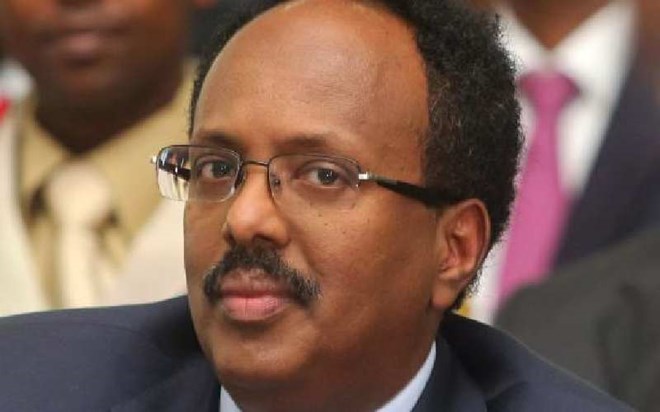 Somalia President Mohamed Abdullahi Farmajo has said he will not tolerate external interference and threats on sensitive internal matters.

Farmajo in a statement by the Ministry of Foreign Affairs said the matters being discussed solely fall within the ambit of Somali people.

He said his administration appreciates the international community’s continued support but will reject any attempts to use humanitarian assistance to blackmail the country and advance their hidden agenda.

“The Federal Government of Somalia calls upon the international partners to reconsider their position on this monumental decision made by Parliament failure to which the Government of Somalia will explore diplomatic avenues available to protect her sovereignty, territorial integrity and political independence,” Farmajo said.
So far Farmajo has signed a controversial law extending his mandate for two years, the state news agency reported, setting the Horn of Africa nation on a collision course with donors who strongly oppose the move.

“President Mohamed Abdullahi (Farmajo) has tonight signed the direction of one person, one vote law which was unanimously passed by parliament on April 14,” the statement issued by the Minister of Information Osman Dubbe.

Farmajo’s four-year term expired in February without a successor.

The new head of state was meant to be chosen by a new crop of legislators, but their own selection was delayed after opponents accused the president of packing regional and national elections boards with his own supporters.

On Monday the lower house of Somalia’s parliament voted to extend his term for two years.

But the move was swiftly rejected by the House’s upper chamber with Somalia’s main donors saying they will not support any term extension.

The United States and the United Kingdom registered their disappointment in the move and called on Farmajo and Federal Member State leaders to return to talks urgently and agree to a way forward to resolve the electoral crisis.

While US Secretary of the Department of State Antony Blinken said such actions would be deeply divisive, undermine the federalism process and political reforms that have been at the heart of the country’s progress and partnership with the international community, UK’s James Duddridge said in the absence of consensus leading to inclusive and credible elections being held without further delay, the international community’s relationship with Somalia’s leadership will change.

However, Farmajo said Jubaland and Puntland in cahoots with their foreign masters are to blame for deliberately crippling stakeholder engagements to achieve a free, fair and inclusive elections.

He said the heroic decision by parliament is in tandem with the aspirations of Somali people for universal suffrage to determine their own leadership and chart their own destiny.

Farmajo argued that in the interest of reaching consensus, he compromised and agreed to demands of the Federal Member States to hold indirect elections which culminated in the signing of the September 17 agreement.

Farmajo said this created an atmosphere of political uncertainty threatening the peace and stability of the country.

“In the interest of peace-loving Somali people and to safeguard Somalia’s nascent democracy, the house of the people of the Federal Republic of Somalia in its wisdom excised its constitutional mandate to restore hope and power to the people,” he said.