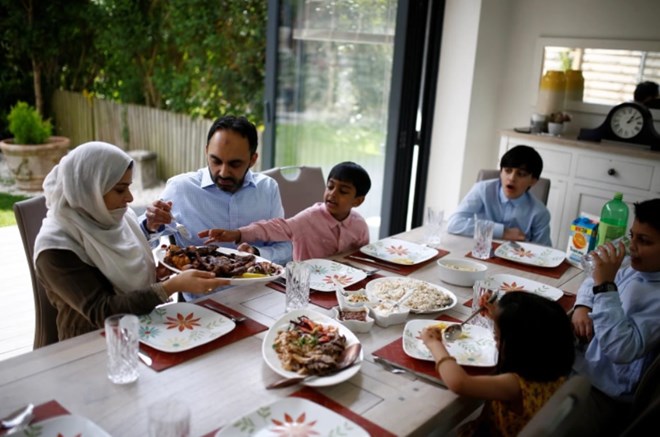 Muhtaz Mansurey, a physician in Victoria B.C., watches old videos of his family in Libya eating together and gathering for the month of Ramadan.

The videos make him feel nostalgic, but when he thinks about what Ramadan will look like this year, the loneliness begins to creep in and he exits his Facebook app.

“It’s so tough to be at home during Ramadan because it’s totally dependent on gathering,” Mansurey says.

For the second year in a row, the month of fasting, prayer, charity and reflection for the Muslim community in Canada is taking place during the COVID-19 pandemic.
Being able to gather, break the fast together and pray in mosques is going to be challenging — or completely prohibited — for those in the community, especially with the continual provincial changes to COVID-19 restrictions.

Despite the volatility, many say it will be better than the abrupt closures and uncertainties they were forced to navigate during Ramadan last year.

“For us, it’s the best time of the year regardless,” says Mansurey. “We feel like we return back to our families.”

Though Mansurey hasn’t been inside a mosque for more than a year, he’s been asked to be the Imam, or leader of the prayer, at a mosque in Vancouver where he will recite the Quran outdoors.

Many people tend to gravitate towards the mosques, even though some will be praying at home, says Jamal Osman, the vice-president of the Muslim Community of Edmonton (MCE) Mosque.

“The act of breaking the fast itself is an act of worship.”

The act of abstinence allows people to practice self-restraint, appreciate their blessings, cleanse themselves and devote themselves to self-growth, their faith and zakat, or almsgiving.

“People feel like they’re part of something bigger,” says Osman, adding that many Muslims are trying to find ways to bridge the gap restrictions have caused.

At MCE Mosque, capacity is limited to about 100 people, or 15 per cent capacity, compared to the 650 people they would normally fit pre-pandemic.

Aside from streaming their services online, which has become popular during COVID-19, they also offer two services on Friday for jummah, which is considered the most important prayer of the week. The mosque allows entry on a first-come, first-serve basis.

“The vast majority of people have demonstrated their resilience and their ability to adapt and reflect,” Osman says. “The practice of Islam is very pragmatic.”

Winnipeg-resident Ala’a Eideh says this year, she and her friends have arranged a socially distanced potluck outdoors. They have also been monitoring the Kp-index, in hopes of seeing the northern lights in the evening.

Additionally, the 36-year-old dietician and nutritionist is producing an episode for YouTube about how to get ready for Ramadan, speaking on how to eat healthily or avoid overeating during the month.

“It’s a lot more hopeful than last year,” she says.

Similarly, though things look different for Samira Hamana in Edmonton, she has decided to bring the spirit of Ramadan into her home.

“In Moroccan culture — where I’m from — we don’t decorate our houses for Ramadan, but this year I will,” she says, adding that she wants to instill the positive aspects of Ramadan in her three kids.

“So they can learn about it, especially when we are not going to the mosque,” she says.

Though she misses going to the mosque, Hamana says the vaccine rollout will hopefully make things better for next year. “But right now we have to think about the safety of our community.”

In cities like Montreal, where an 8 p.m. curfew inhibits people from gathering for nightly prayers, founder and president of As-Salem Mosque, Bilal Abdul Kader, says people are feeling lonelier and in need of a “mental boost.”

“Some people are forced to have their meals alone and it doesn’t have any taste. No matter how tasty the food is, the environment is way more important than the actual meal,” he says.

During Ramadan, there is a strong incentive to share and give back to the community. As-Salem Mosque would typically invite people in to “break the bread on the same table,” but this year they are giving away meals to go.

The mosque distributes about 300 meals a day to families as well as 150 meals for people experiencing homelessness and staying at shelters.

“Because there’s no longer any foot traffic, the homeless have less access to help,” he says. “But we must continue to help those in need.”

Iqra Azhar, a Canadian resident living in Chicago, says many mosques and centres are trying their best to figure out a compromise for those observing and celebrating Ramadan this year.

“Last year I was proud to see how many of our leaders, uncles and aunts became tech-savvy and began streaming services online,” she says.

“But I think we are all really tapped out with that … (we’re) craving that physical community again.”

Azhar owns Slay Collective, a digital media marketing agency connecting a network of Muslim women. This year, Azhar has arranged a global gift exchange, so women can look forward to a hand-picked gift in the mail.

“It’s taking those concepts of community from Ramadan and gearing it towards something that can be done during a pandemic,” she says.

She adds that last year, the community was focused on understanding the pandemic and feeling like they were in “emergency crisis mode.”

“This year, we’ll be able to sit in our homes and have our peaceful traditions on a smaller scale, but also still be connected,” she says.

— With files from Asmaa Toor