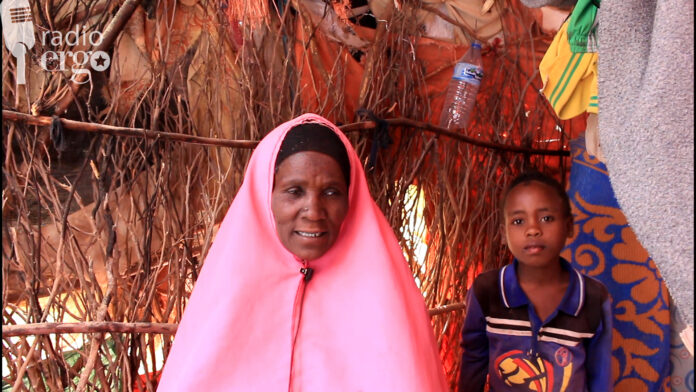 (ERGO) – Nasteho Shafi Herow and her family of 10 reached Qaharre camp on the outskirts of Beletweyne on 13 March after spending three days on the road, travelling from Somali Region of neighbouring Ethiopia.

She moved from Afdub village in Shabelle, one of the nine zones in Somali Region, after losing 80 goats since January due to drought and lack of pasture.

“My family survives on dinner only. During the day, I make tea for the children because we have nothing else,” she told Radio Ergo.

Nasteho is among 260 families who arrived in this IDP camp in Somalia’s Hiran region in March, after losing their livestock and crops on their small farms. They are now facing food shortages among other hardships in the camp, which lacks access to essential services.

She has been taking food on credit from a local shop to feed the family and has so far accrued debts of around $250. The only income the family has is the one or two dollars earned by two of her husband’s sons working as shoe shiners.

The hut they are staying in has only a flimsy roof covering but no sides, leaving them vulnerable to the weather and to insecurity.

“My main concern is getting raped while I relieve myself in the bushes as we don’t have a toilet in the camp. It is too risky, especially at night,” said Nasteho.

The Beletweyne authorities have allowed the displaced families to settle on land in the camps and have given them plastic bags to store water.

Beletweyne mayor, Abdi Hussein, noted that due to the large number of families joining Qaharre camp, it has become overcrowded.

“The people I visited in the camp are in dire need of help. If aid doesn’t reach in time, some of them might even die of thirst and hunger,” he warned.

Most of the IDPs came from Qallafe, Mastahil, Afdub and Shamow in Somali Region, where harsh dry conditions have been building up since 2020.  Nasteho said that since last year, her family had lost a total of 190 goats, including the 80 that died more recently.

Matan Bare Adan moved from Qallafe town after losing 50 of his goats. He has built his family a makeshift hut in the camp, but it is flimsy and will not protect them if it rains.

“We are in desperate need of help. I don’t know anyone in this town, and you can see the status of my shelter,” said Matan.

Matan also lost the crops he planted on his five-hectare farm in September 2020 to invasions of locusts and floods. He has not managed to pay the $209 debt he took to plant his farm.

“We walked for six days before we found a car headed to Somalia, which transported us up to this town,” said Matan, adding that his family of eight now depended on two to three dollars that his wife earned from laundry jobs.