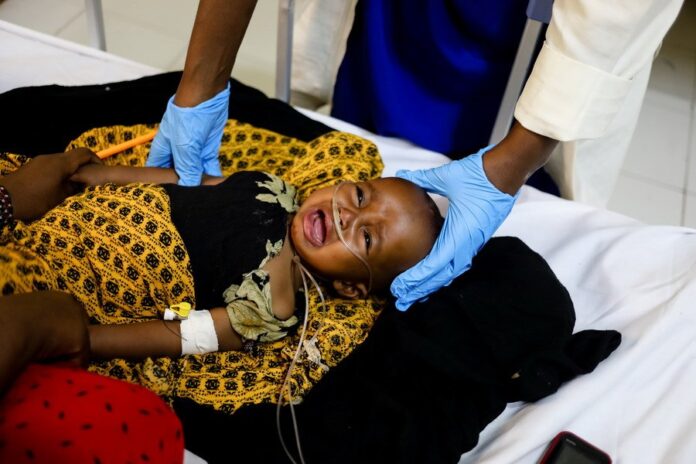 1 April 2021 – On 5 February 2021, minutes after she gave birth to her eighth child at the Hanaano General Hospital in Dusamareb, 37-year-old Zahra’s* heart sank. Her doctor explained her baby had birth asphyxia, which meant she was having difficulties in breathing. She had an oxygen rate of less than 40%, compared to the required levels of 90% and above.

“I cried and was worried when I saw my child very ill,” said Zahra. “I believed she would die.”

Immediately, the baby was admitted to the maternity ward, where doctors rushed to offer her medical oxygen using one of the 3 solar-powered oxygen machines that had just been installed at the Hanaano General Hospital.

“Now I am very happy – I saw the situation of my child improving and saw her receive oxygen for 24 hours a day, as needed. I am really grateful to the hospital team and the World Health Organization,” said Zahra.

Dr Mohamed Abdi, the Hospital Director at Hanaano General Hospital, couldn’t hide his gratitude towards the supporting partners either. Zahra’s baby was special to him because she was the first person to use the solar-powered oxygen since it had been installed. Thanks to one of the new systems, Zahra’s baby’s oxygen saturation levels more than doubled, to 94%.

“I was responsible for laying the first brick in the Hanaano Hospital,” said Dr Mohamed Abdi, the Hospital Director at the Hanaano General Hospital. “Since then, this is the first time I have seen how one timely investment can save lives. Last year, sadly, more than 180 patients died in the hospital, due to the lack of oxygen. Many of them were children. This system will save many lives, and we are really grateful to the Government, WHO, and all the actors who supported this intervention.”

“When the first laboratory-confirmed case of COVID-19 was reported on 16 March 2020 in Somalia and the outbreak was raging across the country, none of the public sector hospitals in Somalia had medical oxygen available,” said Dr Mamunur Malik, World Health Organization (WHO) Representative for Somalia. “Driven by the dire need for pure, high-grade medical oxygen, we realized we had to act fast to save lives – and we did it with the support of our partners.”

In a display of strong international collaboration, the solar-powered oxygen concentrators were installed in the Hanaano General Hospital, Dusamareb in Galmudug State, early in February 2021.WHO collaborated with Grand Challenge Canada (GCC), one of the innovation funders on this intervention.

“Saving lives by using freely available resources — the sun and air. How ingenious,” said Grand Challenges Canada’s Co-Chief Executive Officer, Karlee Silver. “We take it for granted but oxygen is an essential medicine used to care for patients at all levels of the healthcare system, including in pneumonia, surgery, heart failure and emergency obstetric care. COVID-19 has made the delivery of oxygen even more urgent. We are excited to take part in this truly global partnership that has tangible impact, that focuses on local ownership, and that speaks to the particular needs of remote, rural health facilities in Somalia.”

As Site Champion trained by the Global Health Uganda and the University of Alberta, Canada, Abdiirizak Ahmed Mohamud is in charge of monitoring and running the oxygen system.

Every day, Mohamud keys in information on patients using an electronic system and regularly checks that the panels and systems are functioning. He works closely with a team from the Global Health Uganda and University of Alberta. The team is led by Dr Michael Hawkes, a professor from the University of Alberta with a special interest in paediatrics, who monitors these data on a regular 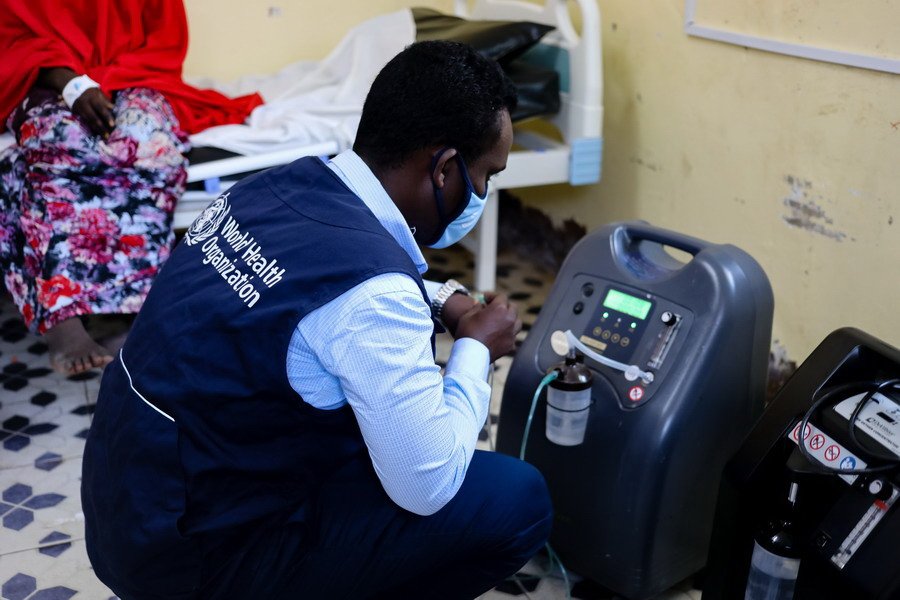 While explaining its use, Mohamud shares that the oxygen system serves people from neighbouring districts too. They learn about it through word of mouth. He adds that, so far, the oxygen system has helped patients suffering from birth asphyxia, pneumonia, COVID-19, major trauma (gunshots, road accidents), shock and comatose, cardiovascular problems such as cardiac failure, and asthma.

Use of oxygen system going above and beyond expectations

Fuelled by an ambition to help medical practitioners in developing countries find sustainable solutions to children’s needs, Dr Michael Hawkes had set up a similar solar-powered oxygen system successfully in Uganda. He set up this system in Somalia as a pilot project to measure its impact in a conflict-affected country, with support from a nurse and project manager, John Kanyonyozi, and an electrician who oversaw the installation, Steven Ngaciki.

Dr Hawkes explains that in low-resource settings like Somalia that witness frequent power outages, this would be likely to affect patients using other sources of medical oxygen, such as oxygen cylinders and concentrators. With a solar-powered system though, there was likely to be a continued promise of uninterrupted sunshine to keep it running.

The support that turned an idea into reality

In addition to the support provided by Grand Challenges Canada and the University of Alberta, WHO’s support to this innovative pilot project comes through collaboration across several departments embedded within 3 levels of the Organization – including the Innovation Team at the WHO headquarters, the WHO Regional Office for the Eastern Mediterranean and the WHO Somalia country office.

“This partnership came about through a new faciliatory role WHO has taken on that links country demands to innovation supply and assessment,” says Dr Soumya Swaminathan, Chief Scientist at WHO. “We are hoping to see similar innovative interventions and multi-partner efforts scaled up across the world to benefit communities in need.”

The Innovation Team from the Digital Health and Innovation department at the WHO Headquarters was responsible for facilitating the project, under the leadership of Ms Louise Agersnap and with key support from Dr Jitendra Sharma. They linked the team in Somalia with the innovator and funding agencies to ensure a smooth installation of the systems.

Various UN agencies and implementing partners have provided support to turn this idea into a reality. WHO is working with the multi-partner-driven “Global Action Plan for Healthy Lives and Well-being for All” (SDG3 GAP) to match the demand and supply of life-saving oxygen in Somalia. The implementation of this innovative solution is also coupled with research supported by the UNICEF/UNDP/World Bank/WHO Special Programme for Research and Training in Tropical Diseases (TDR) to gather evidence of the system’s feasibility, utilization, cost effectiveness and survival in a complex context like Somalia.

On 29 March, the Deputy Special Representative of the UN Secretary-General and the UN Resident and Humanitarian Coordinator for Somalia (DSRSG/RC/HC), Adam Abdelmoula, and the WHO Representative for Somalia, Dr Mamunur Malik, visited the Hanaano Hospital in Dusamareb, Galmudug State of Somalia, to officially hand over the 3 solar-powered oxygen plants to the Galmudug Ministry of Health. 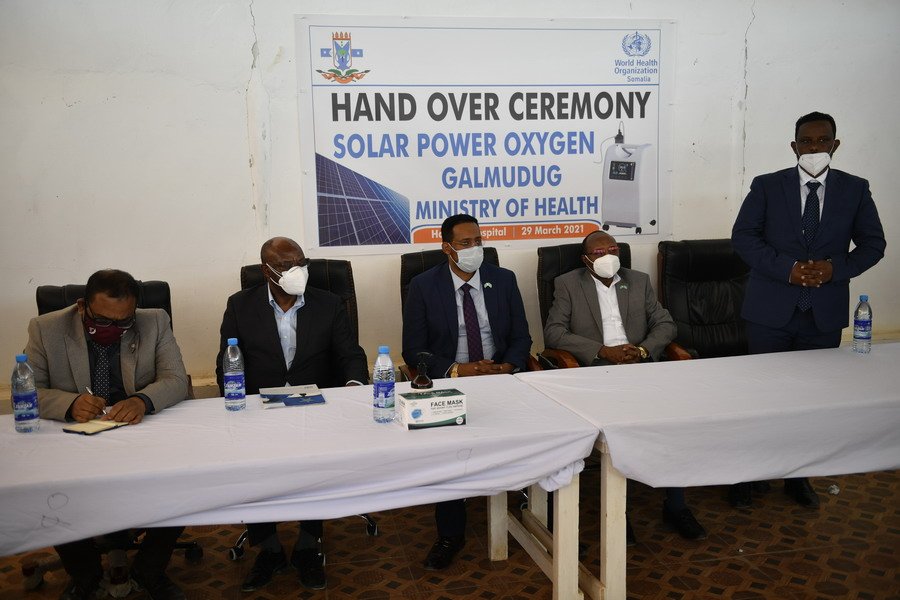 “The availability of medical oxygen in health facilities is critical to saving people’s lives, in any medical condition. Globally, there is a critical shortage of medical oxygen globally, especially in low-income countries. Somalia’s infant and maternal deaths are among the highest in the world. Reducing this number will require bold and strong political commitments to improve access to high quality health services in the country. The right investment that WHO has made on medical oxygen in one of the most peripheral states of Somalia will help in the future not only for COVID-19 treatment but also all the diseases that warrants for supplemental oxygenation therapy, such as pneumonia,” said Mr Abdelmoula during the handover ceremony.

Like most of Somalia, Galmudug – home to nearly 1.5 million people – struggles for resources when it comes to health care. According to authorities, only 38% of the population have access to health care in the entire Federal Member State.

Since these 3 solar power-based oxygen stations were installed, between 8 February and 30 March, 45 patients with different medical conditions received medical oxygen from these stations. Among these, 30 were children. Forty-two patients were discharged as cured.

“Oxygen is a smart investment,” adds Dr Mamunur Malik, on behalf of the technical team of experts working on this pilot project. “If we manage to replicate and systemize the approach taken in this pilot, we can save many more lives, as we are continuing to do in Somalia. This will help us inch closer to attaining WHO’s Triple Billion targets, and the health-related Sustainable Development Goals.”

It is estimated that pneumonia killed an estimated 15 165 children under 5 in Somalia in 2018 (about 21% of child deaths) – about 2 children every hour. While the global evidence shows that up to 35% of childhood deaths from pneumonia are preventable with the use of medical oxygen, the WHO country office in Somalia is hopeful that by forging strategic partnerships with innovators, funders, SDG3 GAP agencies and the private sector, demand for medical oxygen and innovation will increase, which will accelerate the impact of this new initiative in reducing deaths from childhood pneumonia as well as other medical conditions.